It was a bit of a let-down after the excitement of the Consumer Watchdog conference to get back to some old-fashioned contempt from suppliers. You know the type, the ones who don’t seem to give a damn about their customers, who show little interest in fixing problems when they arise.

A reader posted a complaint on our Facebook page.


“I took an inverter for solar power to a technician and he advised me it had blown 2 capacitors which he advised me to buy. I did. They both cost me P95. He advised he would fit. No quotation for the job was raised. My logical assumption was a reasonable charge not more than P200. After fixing, I am slapped with an invoice of P18,000. The inverter was imported from China and it cost me USD1,600 (P14,000 approx). Now to replace 2 capacitors I am made to pay more than its cost. I am held at ransom as I have to pay in order to get the inverter back.”

This is completely unreasonable. Firstly the technician should have offered the reader some sort of estimate or quotation for the work he planned to undertake. Instead he delivered an invoice for repairing the inverter that was even more than the price of buying a brand new one. All in return for installing two capacitors worth less than P200?

Yes, I know electrical devices require specialists to maintain them but this amount is ridiculous. Even if the cost is justifiable the technician should have notified his customer as soon as he realized it was going to be so expensive. Either way he should do his best to be a normal human being as well. 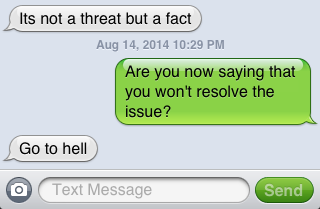 When I contacted him by SMS to see if reason could prevail I was disappointed. I asked him for his side of the story and his response was simple: “I dont have time for that”. I invited him to give a response to readers of Mmegi could understand his conduct better but his response was equally dismissive: “What ever”. I then heard from the reader who said the technician had been in touch saying that he "will not be intimidated by anyone" and is approaching attorneys about the situation. I tried one last time to see if he would see reason and asked if he had indeed threatened no longer to cooperate. His answer was direct. “Its not a threat but a fact”. He concluded by saying that I should “Go to hell”.

Another reader got in touch to tell a familiar tale. In April she received a call from someone calling on behalf of Deetha Leisure who say they have “a vision of offering travelling needs at an affordable rate and make travelling easy and affordable”. The caller and later his colleague offered her membership of their scheme for a mere R5,999.

You’ll have heard this story before, not with this particular company but with others in the same line of business. Despite not getting the explicit permission of the customer they’ve called they persuade them to disclose their credit or debit card details and before they know it the money has been taken from their account. If they’re lucky they then have a lengthy fight to get their money back. Sometimes they don’t.

She was very clear about how she felt.


“Much as I was interested in the product, I no longer want it due to the sheer dishonesty and unprofessional conduct of the two gentlemen and would therefore demand all my money back. I believe it is not right to take money that you and the customer have not agreed on.”

That’s perfectly reasonable. She deserved her money back as soon as possible, whereas in fact four months later they still haven’t repaid her. Last month one of their representatives emailed her admitting that they were late repaying her.


“Sorry for the inconvenience caused but I assure you as per our telephonic conversation the matter it's been dealt with yes I agree it's taking long and I must sincerely apologize for not being in contact or send you any correspondence regarding the matter at hand”.

So far, so good. But still no refund.

I emailed them asking when she would get her money back but things didn’t get any better. I was told that “this matter will be settled its only a matter of time as soon as we have finalized the date on our side she will be notified of the reimbursement”. When I asked when this was likely to be the answer was less than impressive: “as soon as the date is set for the reimbursement she will be notified”. Then they went silent.

This really isn’t good enough. We’ll keep applying pressure and see if they can summon up the decency to do the decent thing.

And finally yet another complaint about wedding and events suppliers. A reader asked:


“What action can one take in a case where you hire a photographer to take pictures and video at your event, You pay 80% in advance and he attends the event as agreed and did the job and promised to bring the package in two weeks. Three months passes without him showing any signs of delivery. I make follow-ups and he makes false promises and I get nothing. What action can one take in this scenario?”

What is it about people who supply services to weddings and events? Why are so many of them so unreliable? Luckily our recent experience during the conference was fantastic but that was only because we chose people we already knew were the very best available.

I don’t know yet how this photographer is going to respond but I get the impression that it’s going to a series of excuses. I suspect it’ll be nothing more than contempt.
Posted by Richard Harriman at 18:44