I bought a laptop charger for P285 on 18th January but only used it for a day and that was it. I called them. They said they do not have a warranty. It was barely 3 days since I bought it. He further said if he tested it in the shop then they is no way he can help me.

Please help. I tried to reason with them but they turned me down, even though they called the boss who still remembered when I brought it. I'm trying to look for the invoice here can't find it now but I remember I paid with my card.

Here we go again. Regular readers of The Voice will know this already but it's such a common event and such an important one that I hope you'll all forgive me for repeating myself.

Section 15 (1) of the Consumer Protection Act says that consumers have "the right to receive goods which are of good quality, in good working order and free of defects". That's simple. The things we buy must do what they're meant to do.

Section 16 (2) of the Act says that consumers "may return goods to a supplier in their merchantable or original state, within six months after the delivery of the goods, without penalty and at the supplier's risk and expense, if the goods fail to satisfy the requirements and standards contemplated".

Let's think about that. Within 6 months of getting the goods, if they go wrong, you can return them without any charge and be offered a solution. But what solution? Section 16 (3) says that the supplier must either repair the faulty item, replace it or offer the consumer a refund but the supplier can decide which is easiest for them. They can, for instance, decide to repair the item. However, the good news is that Section 16 (4) says that if the product is repaired and the same problem happens again within 3 months, they can't offer to repair it again. Then they can only choose a replacement or a refund.

Let me put this very simply. Any supplier of new goods that claims they have no warranty, or a warranty for 7 days, a month or 3 months is either lying, foolish or uninformed. I suggest we both tell this supplier what they should be doing to obey the law.

Update: The store got in touch with the customer and they'll be checking the laptop charger again. Let's hope they'll do the right thing.

In the last week I've been approached by several people on WhatsApp who suggested I can make large amounts of money from Yellow Card. I was also approached by a few on Facebook saying the same thing and I've turned down even more posts from people who wanted to post the same adverts in the Consumer Watchdog Facebook group.

They all had three things in common. They all mentioned Yellow Card, they all promised that I could multiply my "investment" many times over in just a few days and they all included screenshots of payment notifications from FNB. However, all three of these claims were false. Firstly, it's nothing to do with Yellow Card, which is an exchange where you can buy and sell cryptocurrencies. Secondly, there is no investment in the world that can multiply your money seven times in 3 days, as one of these people claimed. Thirdly, the FNB alerts were faked. One of them couldn't even get the letters F, N and B in the right order.

In my conversations with these scammers they all eventually confessed that they were associated with a range of web sites that made these offers and all of these sites were registered in just the last few months. They were also all reluctant to say where in fact they were based, most claiming they were in South Africa but often giving contact numbers in the USA. It was also interesting to see that the web sites were all almost identical. This is clearly an organised scam. Hilariously, one of these fake companies, Hot Trade FX, offered a Certificate of Incorporation from the USA that couldn't even spell the word "America" correctly. 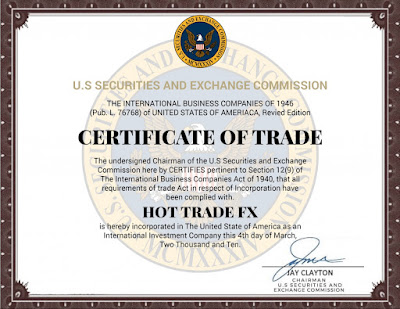 Please I beg you, don't fall for scams like this. You'll never make a profit and I guarantee you'll lose any money you "invest". If you're ever in any doubt if something is a scam, you can always contact Consumer Watchdog for advice. And remember that anyone who invites you to join their money-making scheme wants to make money FROM you, not WITH you.
Posted by Richard Harriman at 12:25 No comments:

Must I take cash?

Sometimes early October 2021 I bought 3 double beds at a store in Kanye whose value was P9326 including transport for delivery. Immediately after delivery I felt the goods were not safe at my place and It would be best to ask the furniture shop to take them back and I will collect them later. The personnel at the shop refused and I had no option but to return the goods. The manager suggested two options to me; to either be refunded or continue keeping the goods for me until that convenient time for me.

I decided to be refunded and he explained they would need a certified copy of my ID and a receipt. I said I don't have a hard copy of my receipt rather a soft copy. He then said I will have to go a make an affidavit at the nearest police station. He then said the best way to deal with the issue would be to come to the office with all the prerequisites and they would refund me hard cash based on whether they have managed to raise the amount on that particular day. I then queried that paying me in hard cash won't be safe because it's festive and there are high cases of armed robbery these days. He responded by saying I should get someone to accompany me. I then requested that the case be transferred to Molepolole shop because I spend most of my time there. He referred me to the Manager in Molepolole who mentioned the same procedure of payment. I tried to negotiate for a bank transfer it was rejected.

My request is for them to refund me my money through a bank transfer not hard cash.

What are these people thinking? They want to give you over P9,000 in cash that you have to transport somewhere safe yourself? Are they insane? I would also refuse the refund this way. This is a job for security guards with protective equipment, training and the ability to defend themselves.

I've heard these excuses about having to wait for enough customers to buy things for cash before they can refund someone else with cash and they're ridiculous. I understand the need for cash and I know not everyone has access to modern banking but it's really time to move into modern times. If you have a bank account and you used that account to buy goods then they should refund you into the same bank account.

However, I do understand that many organisations have a rule that refunds should normally be made using the same channel as the original payment. That's often because they want to prevent people laundering money. The anti-money laundering laws we have are now quite strict and demand these precautions.

I'll get in touch with the Head Office of these stores and see if they can't be a bit more up-to-date and a bit less silly. And a whole lot safer.

How long is the warranty?

How do I deal wth ths issue?

We need to teach this store that Section 15 (1) of the Consumer Protection Act says that a consumer "has the right to receive goods which are of good quality, in good working order and free of defects". That's quite simple. We then need to also teach them about Section 16 (2) of the Act which says that if goods fail to meet this standard, a consumer "may return goods to a supplier in their merchantable or original state, within six months after the delivery of the goods, without penalty and at the supplier's risk and expense".

In very simple terms, terms simple enough for even this store to understand, there is a six month warranty on this ring, not a 3 month warranty. It doesn't matter what they say, the law is right and they are wrong.

Let's do some education.
Posted by Richard Harriman at 14:18 No comments: