Is my bank being fair?

My dad had a fixed deposit account and had an agreement of a stop order of P2,000 to the account monthly. His money was to be withdrawn at the end of the year. This was to be December 2015 but when the time came he didn’t find his monies. He had been to and fro with the bank to no avail. He was then told that a teller defrauded his account and is on suspension and they are still investigating and they will refund him shortly. To date he is being sent from pillar to post. The manager keeps giving empty promises of tomorrow never comes.

My question is who is at fault? The bank staff right? So should my dad suffer because of incompetence of a manager to conclude the matter? Why don’t they refund the customer and they will do their investigations on their own? Will they pay him interest? My father cannot really stand up for himself so he knows less of his rights. Can you assist him?

What a dreadful Christmas present for your Dad! For two years his bank has disappointed him and effectively stolen his money. Yes, I DO mean stolen. Even if the management didn’t steal the money, their member of staff did and they should stand up for their customer, the person who has done nothing wrong in this situation.

I can understand why the bank would want to conduct a thorough investigation of the situation and even to check whether your Dad was perhaps conspiring with the teller to defraud the bank. But that’s clearly not the case. It’s been a year and the police would have been round at his house by now if they had any suspicions. Lawyers will tell you that “justice delayed is justice denied” and clearly your father has been denied justice. And he’s been denied his money.

It really is unacceptable to take this long to deprive your Dad of his money. Rest assured that we’ve already contacted the MD of the bank and I suspect he’ll be getting his money very shortly.

Update: I received a message from the bank saying that they spoke to the father and his story isn't quite the same as the one the son told us. Also he hasn't responded to their invitation to discuss the issue. Maybe there's slightly more to this story than there seems?

What should I do to protect myself next year?

What lessons would you give us that can protect us against abuse in 2017? 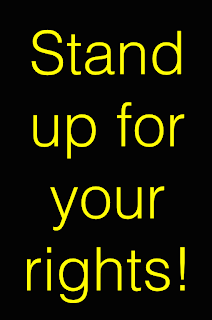 Finally, enjoy Christmas and the New Year. Drive safely, eat and drink sensibly and love your friends and family like you were never going to see them again!
Posted by Richard Harriman at 12:24