Herbalife have released their 2015 earnings figures for their US "members".

If you ignore the fact that they can't calculate percentages correctly the results are still interesting. Interesting but not surprising. In fact it's the same old story. Almost all of the money is earned by a tiny proportion of the members.

Here are some specifics, taken directly from Herbalife's own figures.

80.2% of the members, that's 437,152 people, are just people who buy their products and don't have a "downline". These are the people on the bottom rung of the pyramid. They buy stuff from Herbalife but there's no evidence they sell it to other people.

The most interesting group is those people who earned commission from their downline sales. These are the "Sales Leaders With a Downline". In the USA in 2015 there were 68,768 of them. These are the people that Herbalife offer as examples of the riches you can earn from joining Herbalife.

But there are no riches. 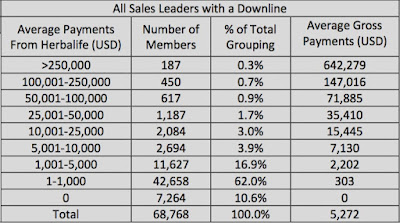 And that's their income, not their profit. That's before they paid their expenses, the phone bills, the transport costs and their electricity bills.

So yet again it's the same old story. If you want to make money from Herbalife you need to be at the top of the pyramid and all the money they earn comes directly from the people lower down that pyramid.

Do you really want to make rich people richer? That's all you do when you join Herbalife.
Posted by Richard Harriman at 21:47