Over the last decade we’ve covered a number of pyramid schemes that have tried to exploit us in Botswana. One of the longest-running was TVI Express, a pyramid scheme that claimed to be based on the sale of travel discount vouchers. Let’s be clear about one thing. A discount voucher isn’t a product, it’s a reduction in the price of a product. What they were really interested in is you recruiting more and more people beneath you, forming the pyramid that makes the people at the top so much money.

Luckily authorities around the world, in places as varied as Namibia, Lesotho, the US State of Georgia and Indonesia soon realized they were a scam and outlawed them. They soon disappeared here in Botswana too as the noose tightened around them.

Another early pyramid scheme in Botswana was “Success University” (which wasn’t really a university) that sold what it liked to call “coursework” but which was in fact just recycled material from a range of prehistoric motivational speakers. As soon as we heard they were recruiting people in Botswana we sent people undercover to their presentations to hear for ourselves how they were describing and selling their business. The story was always the same: join the scheme and you can be rich. They even went so far as to promise specific earnings, saying that you could earn $50,000 per year (about half a million Pula) from the scheme. Lies.

Unfortunately Success University didn’t take kindly to criticism. I arrived at our office early one morning to find four men waiting at the door. They were, they said, from Success University Head Office in South Africa and they were going to speak to me. Luckily they were polite, even when they said that what we had been saying about their scheme was untrue and they were going to sue us. What, I asked, had we said that was untrue? Could they justify their promises of riches? Were their products of any real value? Were they actually entitled to call themselves a “university”?

I think the secret recordings we’d made in their presentations helped persuade them that we had evidence on our side as well as some understanding of how pyramid schemes work. They were also somewhat subdued following rulings by the Bank of Namibia that they were an illegal pyramid scheme and that Namibians should steer clear of them if they valued their money. They went away from our office without the apology, the retractions and the retreat they’d expected from us.

Then something curious happened. Success University stopped trading and all the people who had been recruited into that pyramid scheme were transferred to another one called WorldVentures. This was bizarre because superficially the businesses were totally different. Success University claimed to offer those educational materials but WorldVentures claimed to be in the travel business selling more discounts.

In fact what they had in common was the business model. They were both pyramid schemes.

WorldVentures is a fairly long-lasting pyramid schemes but I suspect it won’t be around for much longer. I’ve known of them for over 4 years and they’re still quietly active here in Botswana but the net is closing in on them elsewhere. The Gaming Board in Norway has recently announced that following a lengthy investigation they are certain that WorldVentures is a pyramid scheme. Their main criteria for deciding this was simple. 95% of all the money paid out to recruits in Norway was for the recruitment of other people, not from actually selling things.

Like many other MLMs that try to appear legitimate WorldVentures have been forced by various countries to post income statements that illustrate what their distributors actually earn from their business. Note important one point. These statements only talk about income, they never mention profit. These figures exclude all the costs associated with running the business like transport, phone and internet bills. 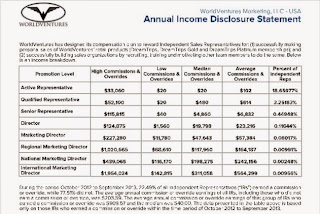 The most recent Annual Income Disclosure Statement I could find for WorldVentures covered their US operation in the year 2012 and it makes sad reading.

Firstly 77.5% of their representatives made no money at all. Nothing. Zero.

For their "Active Representatives", who comprise 82% of the people who made money, their average annual income from WorldVentures was a measly $102. That's roughly P85 per month. And remember that's income, not profits. It's not money you can spend on yourself.

The next group up the pyramid were "Qualified Representatives" who comprise 14% of the people who made money. They made an average of $614 per year, P500 per month, again that’s income, not profit.

The most important figures are about the high earners. Like all pyramid schemes the key thing is to be at the top. The top 3.5% of the people earning money from WorldVentures made 84% of all the money. Worse still, if you include the people who made no money at all you get the real figure. 84% of all the money flowing through the WorldVentures is taken by the top 0.8%.

And those lowest level earners, the "Active Representatives"? They're 82% of the earners but between them they only earn 7.8% of all the money.

Let me put it another way. More than 99% of Americans who join WorldVentures make less than poverty wages from their business.

The lesson is simple. If you own WorldVentures then you're rolling in money. Otherwise all you're doing is handing over your cash to those people and not seeing anything in return.

I’ve heard that WorldVentures will be making another effort next month to recruit people in Botswana into their pyramid. I suspect that as regulators are investigating them elsewhere in the world they’re looking for new countries to explore and new victims to exploit. Are we going to let ourselves be their next victims?

Please spread the word and prevent our country from being exploited by yet another pyramid scheme.
Posted by Richard Harriman at 09:57