It’s good to help one another. Charity, kindness and generosity are all essentially human virtues. With the exception of sociopaths, the criminally insane and combi drivers, we’re nice people who help our relatives, friends and neighbours when help is needed.

But often help isn’t all that it seems.

Several people have asked us recently about an organization calling itself Helping Hands International. Is it legitimate, they ask us?

Helping Hands International describe themselves on their web site like this.


“Helping hands international(H2i) is an empowerment-based- membership program, a global opportunity born out of the passion for total human capacity development and for helping the less privileged. Experience our beautiful world, as helping HANDS International gives you the definite touch that you need for the indefinitel Empowerment of yourself and the people around you.

Not only do we empower your life, we also work with you and through you for the empowerment of others - by you simply recommending H2i to your loved ones(Family and friends) for help and empowerment......WELCOME TO OUR WORLD OF ENDLESS POSSIBILITIES!”

Are you suspicious yet? You should be.

They go on to say that they offer:


“life changing empowerment services that empowers your life” and that they render “help and amazing services that touches and empowers lives of members and non-members (less privilege, window, motherless homes and the needy)”

But how? How do they do these miraculous, charitable, helpful things?

It’s quite simple. By recruiting people who pay to join the scheme. Their proponents on Facebook say that you can enjoy “multiple streams of income” and imply that this will allow you to “achieve all your dreams” and receive “financial freedom”, “passive income, business grants, brand new cars, laptops/iPad, house of your own, all expenses paid trip abroad”, the list goes on and on, culminating in “residual income for life”. 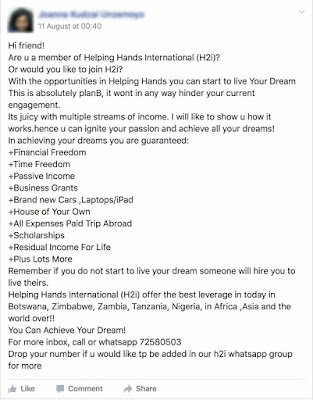 However, despite my best efforts, I can’t find any clue as to how any of these things can be achieved. Do they have any products to sell? Multi-Level Marketing companies like Amway sell household products and Herbalife sell “health” products (although it’s cheaper and healthier just to buy yourself some fresh fruit) but with Helping Hands International there’s nothing. They sell nothing but illusions of wealth and prosperity. In fact, in a discussion on Facebook, one of their representatives offered a number of questions and answers that tell the whole story.

One of the questions was “When I sign up, do I need to sell any goods like other MLM companies?” The answer was very telling: “No. We don’t sell any goods.”

I’m incredibly skeptical about all Multi-Level Marketing schemes. The evidence from the figures that Amway and Herbalife have been forced to publish about their recruit’s income show that the overwhelming majority of people who join these schemes either make nothing from their membership or they lose money. The only people that make a living from it are the ones at the top of the pyramid. But at least they have products to sell.

Another of the questions that the representative posed was this: “Is there any reputable organization in support of” Helping Hands International? Their answer was remarkable. They claim that they’ve “been recognized by the United Nations for the incredible charity works they have been doing across the globe” and that they are “proudly sponsored by glo, Apple, hp, Hyundai”.

This is what we call “a lie”. A flagrant lie. It’s simply untrue.

The UN and companies like Apple, HP and Hyundai don’t “sponsor” scams like Helping Hands International. They don’t and they haven’t.

If anyone approaches you inviting you to consider joining Helping Hands International I urge you either to show them the exit and invite them to use it or explain to them that you already know it’s a pyramid scheme. Explain further that you’re not the sort of person who joins illegal and immoral pyramid schemes. You’re not that stupid.

Like all pyramid schemes this one will eventually collapse, just like Success “University” and TVI Express did. Like Eurextrade, which I recognize was a Ponzi scheme and not a pyramid scheme, sooner or later the people who’ve been recruited will begin to realize that the money they “invested” has been lost forever. They’ll make last-minute attempts to withdraw from the scheme but it’ll be far too late. Their money will have gone, the promised wealth will have been shown to be a deception and relationships will have been ruined.

That’s perhaps the worst aspect of MLMs and pyramid schemes, the effect they have on relationships. New recruits to MLMs and pyramid schemes are actively encouraged to recruit as many people as possible into the scheme and are often told to start with the people closest to them, their family, friends and colleagues. Many of you will have experienced this, I have several times. In my case it’s been quite acute. Once they realized quite how skeptical I was about such schemes they know they’ve exposed themselves as a fool and the sort of person who would risk our relationship in order to make money from me. None of these people speak to me any longer. Luckily for me none of them have been close friends or family, they were just acquaintances but I’ve seen the damage done to other people’s relationships.

Please avoid Helping Hands International like it was a nasty infectious disease.

Because it is.
Posted by Richard Harriman at 13:49