World Ventures is a pyramid scheme that we've mentioned many times before.

Recently it updated its brand and started calling itself "Dream Trips" but it's still the same old thing.

World Ventures publish an "Income Disclosure Statement" every year and it makes interesting reading. Like all pyramid schemes the majority of the money is earned by a very small proportion of the people, the ones at the top of the pyramid. 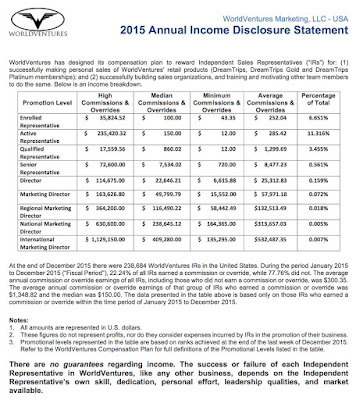 The statement for the USA in 2015 can be seen here and you're welcome to analyse it for yourself. However, if you don't have a calculator to hand, here are some of the highlights.

But don't forget two important things. Firstly, like I mentioned above, only a quarter of all the recruits earn anything. These figures just refer to the quarter of victims who earned anything at all.

More importantly, these amounts refer to income, not profits. These figures are before the recruits took account of all the money they had to spend on travel, accommodation, electricity, internet access and the coffee and drink they had to buy when they did their best to recruit other victims into this scam. I suspect that most people earn less than they spend trying to make the money. They lose money.

In short, please don't waste your time, effort and money with World Ventures or Dream Trips.
Posted by Richard Harriman at 17:00