Have I really won a P1 billion tender?

Please check for me if this is genuine. I'm dealing with people I have never met in South Sudan and they want to give me HUGE amount of money for a Government of South Sudan contract. The contract is to supply them with 500 Toyota vehicles.

I first saw their advert of open tender on internet and I applied later after three weeks they responded by sending some of the documents I have sent you on email. Please help as I want to know if this contract is real. So far I have not send any money to them as we agreed that they should register the company for me in South Sudan and I will pay them later when we sign contract in South Sudan. 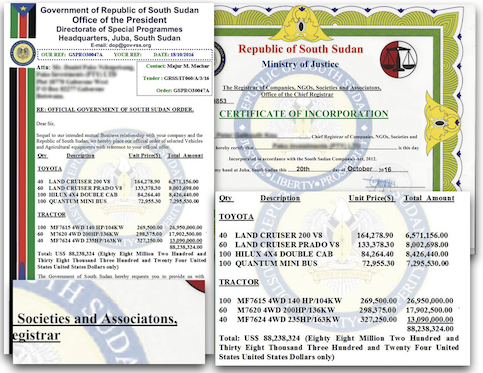 There’s no doubt about it. This is a scam. The clues are all there if you look for them. Firstly, there’s the quality of the language they use. The official language of South Sudan is English so don’t you think officials there would either know how to spell “Associations” in official documents or that their computer’s spell checker would do that for them? Do you really think that the Director of Procurement in the South Sudanese President’s Office would write things like “There are no much procedure and condition attached”?

Then there are some practical issues. Why would the South Sudanese government want to buy Toyotas from Botswana instead of directly from Toyota in Japan? Or even from one of the existing Toyota dealers in neighboring countries like Uganda? Who would want to transport 500 vehicles an extra 4,500km from landlocked Botswana to South Sudan rather than 1,000km from the nearest port in Kenya?

Finally, and I don’t mean to be rude, but why on earth would they choose to give a deal they say is worth $88 million, almost P1 billion, to you? What qualifies you to take on a deal that enormous?

This is all part of an advance fee scam. Very soon, probably just before you think they’re going to send you the 70% up-front payment they promised, they’ll demand that you pay them some money in advance. They’ll probably say it’s a legal fee, a tax or the cost of establishing your company. Whatever it is, that’s what the whole deal is about, that “advance fee” they want you to pay them. Of course if you pay it they’ll know you’re a sucker and there will be a series of further payments they’ll demand from you. That will continue until you either realize you’ve being scammed or you run out of money.

Please just delete the emails and don’t waste any more of your time and effort.

Can you explain the difference between a pyramid scheme and a ponzi scheme?

That’s a very good question. Firstly, because they are often confused and secondly because there are so many of them out there trying to steal our money.

A Ponzi scheme is a scam where people are invited to join and often promised massive profits but the little amounts they actually receive are simply taken from the joining fees of the people who join later. If I pay to join on Monday and you pay to join on Tuesday, I’ll be given a small fraction of your joining fee. You’ll then receive a small amount from the person who joins on Wednesday and so on. Eurextrade was a Ponzi scheme that hit Botswana a few years ago. Another called Billcoin is doing its best to recruit people right now. They promise amazing profits but the only money recruits actually receive (if anything) are tiny fractions of what they pay to join.

A pyramid scheme is slightly different and relies on recruiting layers of people beneath you. You’ll be encouraged to recruit people who will in turn try to recruit people beneath them. You might be encouraged to recruit five people and they’ll each try to recruit five of their own. After just two generations there’ll be 25 people, 125 in the third, then 625and if it was to reach ten “generations” there would be over 12 million recruits in your pyramid. If every one of those recruits paid to join and you get paid for each of them, you’ll be rich. That’s clearly nonsense but that’s how these schemes entice people. They talk about “passive income”, implying that once you start the recruitment process you can just sit back and watch the money coming in. Most importantly, despite the claims of pyramid schemes like World Ventures, there’s either no actual products or there’s just worthless products at the heart of the business.

Then there are Multi-Level Marketing schemes. Imagine a pyramid scheme with some products and you’ll have MLMs like Amway and Herbalife. However, even though they have products their own figures show that the vast majority of MLM recruits make very small amounts, make nothing or even make a net loss. My advice? Avoid them all.
Posted by Richard Harriman at 12:47