I would like to know from your agency if you could help me to confirm that Hansford University is a fake or not. Thanks a lot. 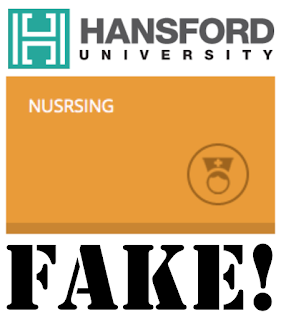 I first looked at Hansford “University” in 2013 when another reader asked whether they were a legitimate university. It was very clear, very quickly that they weren’t. Not even slightly legit.

I visited their web site and had an online chat with one of the “advisors” who called himself Jason Brown. I said I was interested in getting a Bachelors degree in Nursing, or as they spell it, "NUSRSING". I told him that I needed to get the degree as quickly as possible in order to get a promotion and I asked how quickly I could get such a qualification. I told him that my only experience in a hospital had been five years as a cleaner.

All I needed to do to get a degree in Nursing from this bogus university was to pay them $199. Do they have any idea how dangerous that is? That they’ll sell a fake degree in Nursing to a total stranger who may then get a job based on that qualification? Someone whose only experience was as a cleaner? Someone with no actual skills in nursing at all? Someone who might then end up in a hospital ward responsible for people’s health? Someone to whom we would entrust the welfare, health and life of our loved ones?

Hansford “University” is a criminally reckless, bogus and fake establishment that is selling illegal certificates that have precisely no value. Please don’t be tempted ever to buy one because you will then be as criminal as they are. Remember that if you get a job or a promotion based on a fake qualification you can not only be fired, but you can be prosecuted as well. Are the disgrace, embarrassment, unemployment and a prison sentence really worth the risk?

When will I get my refund?

On the 15 October 2016 I went to a hotel in Mogoditshane to book a venue for my daughter' s birthday. I paid P2,500 for the venue, and because my daughter liked the venue, I asked them not to change when somebody comes with more money. They promised that it is first come first serve basis. On the 3 Nov they called me and said they have changed the venue since they are renovating, and I asked if they didn't know when they took my money, and they said they thought they would have finished. On 6th November I took my daughter to go and see the new venue, she did not like it. I also learnt that they moved us so that they can host another client whose party cost more I believe. I demanded my money back and they promised to credit my account that day.

To my disappointment the hotel hasn't refunded me yet. I asked them what if it was me cancelling and they said there could be charges. I am now wondering if I should not sue them for inconvenience.

The other thing is I want to shame then on Facebook, is it ok to do so??

Firstly, let’s talk about Facebook. I’m not really a believer in “shaming” people or organizations. However there’s every reason to report the situation so that other people can learn from it. So long as what you say is 100% truthful, you have every right to do so. That’s what the Consumer Watchdog Facebook group is there for.

Then there’s the Consumer Protection Regulations. The room you saw and agreed to hire was not the one they ended up offering you. The hotel therefore broke Section 13 (1) (a) of the Regulations when they offered you a room that “does not match any sample or description given to the consumer”. Then, by “failing to promptly restore to the consumer entitled to it a deposit” they’ve broken Section 15 (1) (e).

We’ll get in touch with the hotel for you and see if we can’t encourage them to speed up a little bit. That’s not too much to ask, is it?
Posted by Richard Harriman at 16:15