Bitcoin and the Bitclub Network - one is a scam

Bitcoin. That's been the big issue for us this week. So many people have been in touch asking if it's a scam, should they get involved, is it risky?

The simple answers are No, Maybe and Yes, in that order.

So what is Bitcoin?

That's simple to answer but perhaps hard to understand. Bitcoin is a currency, but not like any currency you've known before. It's a digital currency, other times called a virtual currency or a cryptocurrency. There are no coins or notes with Bitcoin, no bits of metal or paper. Nothing you can put in your wallet or purse. Bitcoins exist purely in cyberspace. It's online money.

And that confuses people. What confuses them more is the technology behind Bitcoin. Terms like "blockchain", "distributed ledger" and "Bitcoin mining" are hard to understand unless you're an expert. There's also the simple confusion that your money is "out there" somewhere and not in your pocket. That's odd.

The Blockchain and Bitcoin mining

In fact the "out there" element is very new and innovative. The blockchain, which is a database of Bitcoin transactions that records and confirms every transaction ever performed between people using Bitcoin, is hosted all over the world, not in one place. The so-called Data Miners who run the computers on which the Blockchain is hosted can themselves earn Bitcoins by holding and verifying the transactions. That's something revolutionary.

However, it's important to know that the computing power required to do this is beyond individuals and can only really be achieved by "mining farms" with enormous processing power and energy consumption.

Despite all this, I'm fairly certain that Bitcoin or something like it might be the future. Many of us already use international online payment systems such as Paypal and Apple Pay and local money transfer services like eWallet, MyZaka and Orange Money but they're all based on a currency that we know. Bitcoin is a step further. Not only is it an online payment mechanism but it's its own currency.

So it's real. It's legitimate. It's not a scam.

But it's still highly risky.

Bitcoin is still remarkably new and even financial experts have no idea of what it's future will be. Some are already saying its days may be numbered.

What's more, and despite what some proponents are saying, its value can easily go down as well as up. If you bought Bitcoins in November 2013 you would have lost 78% of your "investment" by January 2015. Even today you would still be down by 24%.

I admit I've chosen the highest and lowest values but my point is that it's volatile. Yes, all currencies are volatile but Bitcoin is clearly even more volatile than most others.

Then there are security concerns. As we understand it now, the technology underpinning Bitcoin is highly secure but anyone who says that a particular security protocol is foolproof hasn't read their history books. All security technologies will be cracked or hacked sooner or later and if a flaw is ever discovered in Bitcoin's security mechanisms it would be valueless instantly. Say bye-bye to your money.

The fact that it's completely unregulated is another concern. If a conventional currency like the Pula, US dollar or Euro showed signs of failing, central banks would do something to support it. We've seen that happen before in various countries. But with Bitcoin, there's nobody out there to help you.

Another issue is that when you spend Bitcoins there are fewer payment protection mechanisms available to you. There are no rights to refunds and no chargeback mechanisms. In December 2013 the European Banking Authority warned consumers that:


"No specific regulatory protections exist that would cover you for losses if a platform that exchanges or holds your virtual currencies fails or goes out of business."

Should I buy Bitcoins?

I'm not saying that Bitcoin is a bad thing. On the contrary I'm very interested in it and think it's a sign of the future. But it's risky and before anyone buys Bitcoins they need to remember that they should only ever invest speculatively with spare money, money they can afford to lose. Do not buy Bitcoins with the money you need to pay your home loan, rent, food bills or school fees.

Then there are the scams.

Because so few of us know much about Bitcoin, but a lot of us have heard of it, we can easily be suckered by scammers trying to exploit is. Ponzi and pyramid schemes like MMM Global, Billcoin, Onecoin and Pipcoin have all pretended either to use Bitcoin or to be something like it. It's all been lies, designed to cheat you.

There are also schemes that are based on Bitcoin but are using scammer's tricks to get your money.

The Bitclub Network is a good example. They describe themselves as "The most innovative and lucrative way to earn Bitcoin" and they suggest that Bitcoin mining (see the explanation above) is a way to make money.

They go on to say that "With BitClub Network you earn daily profits from our shared mining pools. We also have a referral program so you can get paid for anyone you refer."

Various people have issued warnings that Bitclub Network is either a pyramid scheme or a Ponzi scheme. One promoter of the scheme described the business model like this: 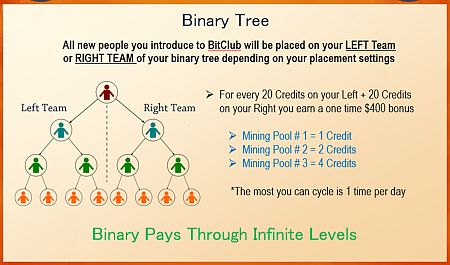 Bitcoin and the technology it uses are fascinating. However it's no more than a currency, it's not an investment scheme. If anyone tells you otherwise and encourages you to start buying Bitcoins or to join a scheme like Bitclub Network, saying you can make lots of money, ask yourself this simple question. How do they benefit from me joining?

The chances are that they're trying to make money from you, not promote the future of money.
Posted by Richard Harriman at 21:52