It’s a sad truth but the war against crooks and their abuse will never end. Crooks are just part of life and even though we can win some battles they’re never going to go away. We’ll never actually win the war when some people just seem naturally disposed to lying, stealing and cheating.

Let’s take Eurextrade as an example. You’ll remember that this was a Ponzi scheme that stole large amounts of money from many, many people in Botswana. Although most of the victims only handed over a few thousand Pula we heard of others who lost hundreds of thousands. We even heard of one particularly gullible (and let’s face it, greedy) victim who sold two houses and a Range Rover to raise money to “invest”. He ended up hospitalized when he realized that he’d never see that money ever again.

So you’d probably think that we’d have learned our lesson by now? That miracle investment schemes that promise “up to 2.9% daily” like Eurextrade did can’t be trusted? You’d think so but maybe not.

Just a few days ago someone alerted me to an advertisement on a Botswana-based Facebook group that said “WHO WANTS TO BE A MILLIONAIRE? THE MOST UNBEATABLE LONGTERM INVESTMENT PROGRAM JOIN NOW. DONT LEFT BEHIND.”

The advert gave a link to the web site of “Invest Partnership” who make some remarkable offers. They claim that if you give them between $3,000 and $5,000 you can make 2% every day. Not so far away from the Eurextrade offer, is it? 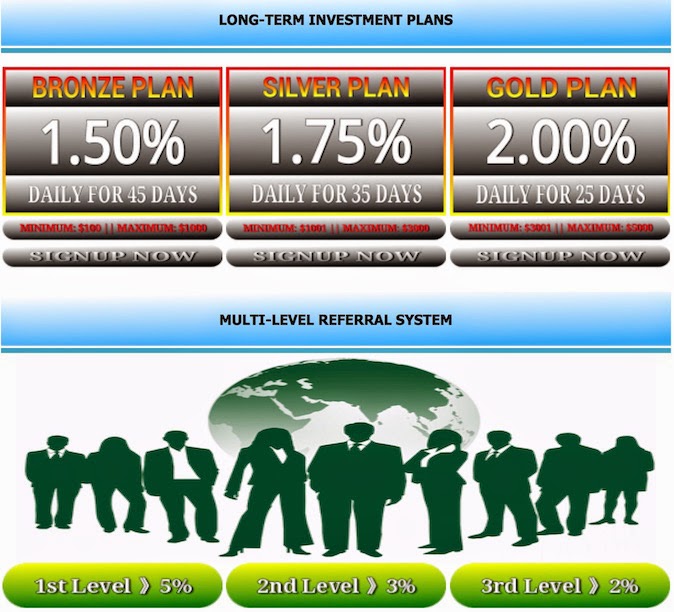 They also claim that if you invest $2,500 for a mere seven days that you’ll make 15% every day, more than doubling your money in that week. Just for illustration I tried to work out how much money you’d make if you kept reinvesting your profits for an entire year and the answer was very simple. 400 billion times more money that there is in the entire world.

This is clearly absurd. What’s more absurd is that these crooks want us to trust them with our money when they don’t offer a physical address, a phone number or an email address and even though they say they’ve been operating for a year their web site was only registered a couple of weeks ago. Offering impossible profits isn’t the only warning sign, there are plenty of them.

Nevertheless I won’t be surprised if some people do hand over their cash because gullibility, greed and a desire for something for nothing will always emerge and will always be exploited.

It’s not all about gullibility and greed though. Those of us who go about our daily lives not expecting to make instant fortunes without effort, are also threatened by crooks.

Most people now know about card skimming. This is when a crook manages to make a copy of our debit and credit cards and then starts spending our money. There are usually two stages to this. Firstly the card has to be copied. This can be done remarkably quickly using a range of portable devices, some so small they can fit in your hand. All it takes is a quick swipe and the contents of the magnetic strip on your card are copied and are used to manufacturer a duplicate card. Then they do their best to get your PIN. This can be as easy as standing next to you in the queue at the ATM or by installing a hidden camera on the ATM machine itself. It can also be gathered from a phishing attack when you give you card details away on a fake version of your bank’s web site.

With both the contents of the magnetic stripe and your PIN the crooks can be spending your money within minutes. Just last week we heard from a consumer who woke up one morning to find a series of SMSs on his phone telling him how much money he’d spend overnight in Peru. Needless to say, he’d never even been to Peru.

Last week Barclays took the lead in educating us on these issues. They brought some of their regional fraud experts to Gaborone to run workshops on the problems. Despite what many people think there are success stories. For instance, following investigations by banks and police forces so far this year over P200 million has been recovered from crooks around Africa and a number of them are now serving long prison sentences for the crimes.

One thing that Barclays’ experts were able to confirm was a suspicion we’d long had that the crooks who skim cards are very well organized. They’re also into other crimes including land fraud, theft, carjacking, armed robberies, drug smuggling, computer hacking, ID fraud and even assassinations. They really are organized crime.

One of the most important things they mentioned was a new threat that has only recently emerged. Fake POS devices. We’re all familiar with the machines our debit cards are swiped through when we buy things in stores and restaurants. The new threat is from fake versions of the portable versions of these devices. A waiter (who’s part of the conspiracy) will approach you when you want to pay and will swipe your card through a fake machine and ask you to enter your PIN, just like normal. However he or she will then apologize saying the transaction didn’t work and they’ll get another machine. The second one is genuine and your payment will work normally this time. Meanwhile the details from your magnetic strip and your PIN were recorded by the fake machine and transmitted to Peru (or wherever this particular gang are based).

At the moment the only solution is a mixture of public education and consumer vigilance.

Well done to Barclays for doing the first bit. Now it’s up to us to be vigilant.
Posted by Richard Harriman at 10:30