There really is a war between the forces of good and scammers. It’s a war that I suspect will never be won but that doesn’t mean we should surrender and it doesn’t mean we can’t win some battles.

Since we started Consumer Watchdog ten years ago we’ve seen the scam industry evolve. In the beginning it was dominated by the traditional “419” or “advance fee” scam with their emailed pleas from a very attractive orphaned young daughter of a millionaire to assist in transferring the proceeds of an inheritance from Nigeria to a more stable country. Inevitably before this fictitious inheritance could be sent there would be the “advance fee” the scammers would demand. It might be a legal fee, the cost of opening a bank account or even a bribe, but they’d demand a few hundred US dollars up front. That was what the entire scam was about. Of course there was no orphan, no deceased millionaire and certainly no inheritance. All that was true was the payment the victim made, inevitably using a non-traceable payment mechanism like Western Union.

Then, after people became a bit more skeptical, the scammers evolved. There were new scams, some involving lottery wins (you can’t win a lottery you didn’t enter), others involving mysteriously well-paid job offers on cruise ships or oil rigs. All involved the same up-front payment, the advance fee again.

However if you think that we’re all now skeptics and advance fee scams are a thing of the past then you’re unfortunately wrong.

We heard last week from a reader who found himself a real bargain on a second-hand car sales site. A 2008 Land Rover Defender 110 TDi for a mere R39,000. Given that the normal price for such a vehicle can be as high as R200,000 this seemed too good to be true.

Are you suspicious yet?

Unfortunately the reader wasn’t suspicious. Instead he was really interested and he contacted the guy in South Africa selling the car who was very keen to talk. Only 14th July he said:


“My name is Frank Koopman, I'm a programmer and since the past month I've worked on a big project which I Won, and got a job in a big company in London UK that is paid up to 10 times higher salary then here in SA.” 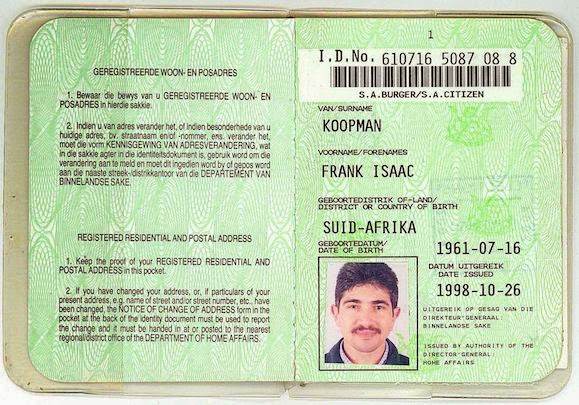 He went to describe the vehicle and how be planned to sell it:


“The car has no damage and runs great, the engine runs like a cat and nothing is wrong with it, tested! I'm also a Verified Member/Trader of eBay and whole procedure (delivery/payment) will go through eBay, as they will handle everything. eBay will send you an Invoice with all the info you will need to complete the transaction. Also a 10 days refund policy will be included so if you will not like the car you will receive your money back.” 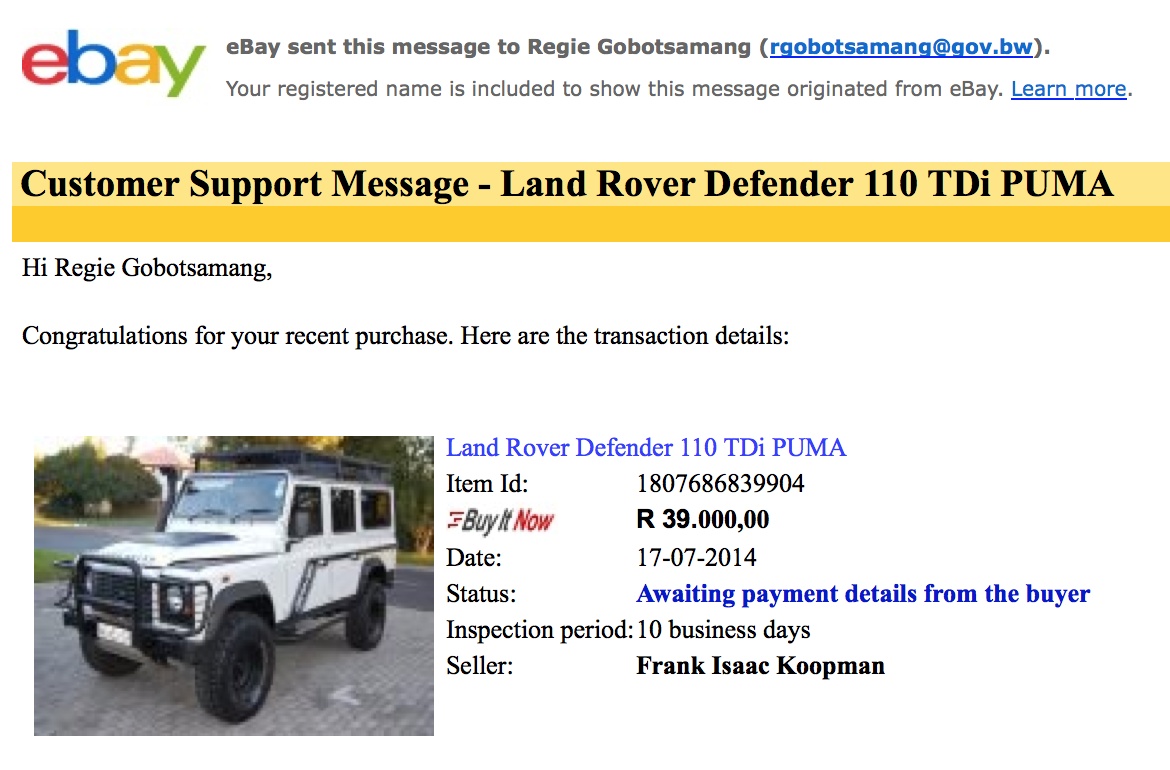 Are you suspicious yet?

Anyone who knows anything about buying and selling things on the internet will be suspicious by now. This is simply NOT how eBay works. Yes, eBay do allow subscribers to sell vehicles but they don’t actually handle the transfer of money. On their web site eBay make this perfectly clear:


“It is important to remember, eBay does not “validate” listings, provide escrow services, or make payment arrangements on behalf of sellers.”


“Never pay with MoneyGram or Western Union. Western Union and MoneyGram are prohibited as a payment method on eBay Motors. eBay will never recommend that you use either to pay for a vehicle.”

Yes, “Frank” wanted to be paid for his vehicle by a Western Union. Then things got a bit worse. Our reader didn’t actually have the money to buy the car so he went to his bank and applied for a loan to buy it. On 6th August his loan was, unluckily for him, approved. A week later and R39,000 was paid into Western Union and withdrawn by someone 5 days later.

Then the story got even more bizarre. “eBay” emailed the reader telling him:


“We have bad news for you, in this moment we were informed that the truck on which was your caravan loaded for delivery was involved in an accident and was overturned. The good news is that you paid a delivery insurance for these unexpected things covering the amount of R300,000.” 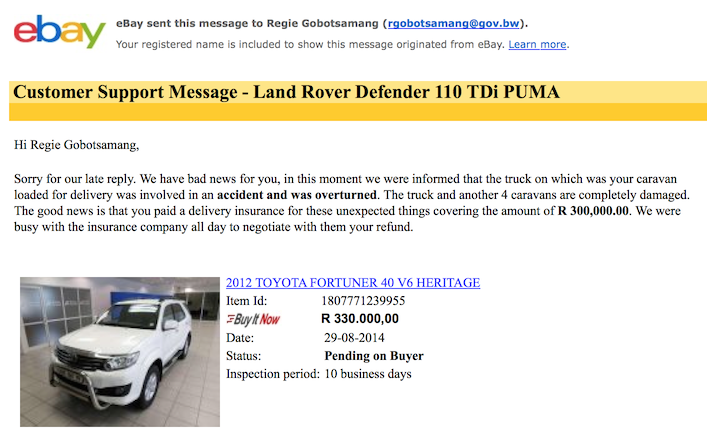 By this time our reader was himself suspicious and he was clearly beginning to understand that something was very badly wrong. That’s when he came to us for help. Had he been scammed?

So, yet again, I had to break the bad news to him. No, he was never going to see the Land Rover, nor would he get a Fortuner and certainly not an insurance payout for a very simple reason. None of them exist, they’re all elements in a scam. And his money? Gone. Remember that scammers don’t offer refunds.

The lesson is very simple and I think we all know it already. If something seems too good to be true then it almost certainly is.

Please don’t fall for scams like this. All it takes is a little skepticism and common sense and you’ll be safe.
Posted by Richard Harriman at 11:36