Another scammer - let's ruin his day

Calling himself "Mr PATRICK ADAMS", he emails his victims from his free Italian email address saying that they have won €1 million on the Mega Millions Lottery Award Division. His phone number is +31 68 508 3128. He called me "stupid" when I said he was a scammer. When I asked whether his brain was bigger than his penis he hung up on me. Spend P1 and tell him what you think of him. 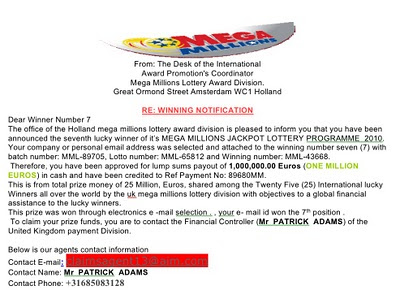 Posted by Richard Harriman at 21:00

Not only that, he stole the logo from the REAL Mega Millions from California Lottery in the US!

And here's the REAL MegaMillions logo: