Yesterday afternoon I was at a Supermarket at Game City. After making a payment with my debit card, the teller asked (more like commanded) me to sign the slip and write down my telephone number and ID (Omang). I signed and wrote my cell number but refused to write my ID. I told her that she had seen my Omang as proof that I was the owner of the card and did not understand the need to write those numbers. I further stated that if that was a problem, then she needed to call the manager.

She then went to talk to three ladies who could have been her supervisors, but no manager was called. Upon her return, one of the ladies came to the till and agreed that the phone number was adequate. The teller was very persistent that they had been instructed to tell customers to put down the numbers and ID.

I am intrigued about the laws, procedures and regulations regarding the use of debit card and proving your identity in Botswana, particularly in Supermarkets. I am not very comfortable with this.

I don’t know of any law that allows a store to demand this, other than their right to protect themselves from card fraud, but I think you are perfectly right to be cautious about giving out this information. While I think we all understand that stores have a right to double-check your identity when you pay using plastic, there are limits to how far I think they can go. I think you are very wise not to give out your Omang number to a total stranger. Yes, it’s perfectly fine to show them your Omang or driver’s licence I don’t think they have a right to note down the number.

We have heard of too many cases in which people have given away their personal details and had them abused by criminals. While supermarkets aren’t scammers who knows where the slip of paper will end up when they’ve finished with it?

I also think you were right to demand to see a manager and to seek an explanation. It sounds like what you witnessed was the store supervisors realising that their practice was a bit unreasonable. That’s something that more of us should do when faced with some made-up rule. Call the manager and ask them to explain why they have a rule like this. Good for you for sticking up for yourself.

We issue this alert every year but it’s an important one. Several people have contacted us about an email they received from “The World Business Guide”. The email says:

In order to have your company inserted in the registry of World Businesses for 2011/2012 edition, please print, complete and submit the enclosed form (PDF file) to the following address:

Updating is free of charge!” 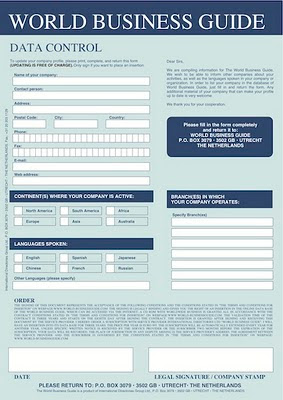 This is a scam. Firstly, have you ever heard of the World Business Guide? No, nobody has, other than those people who know about this scam.

Note that last line in the email: "Updating is free of charge". Well, while it might be true that “updating” your entry in this fake directory is free, placing your first entry in it most certainly isn’t.

When you sign the form they email you and send it over to these people in The Netherlands you probably won’t notice the clause written in tiny characters that says:


"The price per year is Euro 995. The subscription will be automatically extended every year for another year unless specific written notice is received by the service provider or the subscriber two months before the expiration of the subscription."

Many people have fallen for this scam all over the world and have ended up paying these crooks the money demanded. Some who refused to pay up ended up receiving legal threats. Of course it’s all based on a deception and no legal action would ever actually work but you can imagine how scary some people would find that experience. There has been some action against this scam, for instance the company behind it was prosecuted in Switzerland but this hasn’t stopped them. This is a scam and I'm not the only one who thinks so. There are web sites devoted to exposing the scam, there's a Facebook Group and loads of comments all over the internet suggesting they are crooks.

If you get an email from these people, please just delete it. However if you feel like taking the battle back to the scammers why not send them an email explaining that scammers like them should leave Botswana alone.

Just for research purposes, and please don’t try this at home, I actually filled in one of these forms with fictitious details to see how aggressive they become when I claim not to have noticed the small print. Let’s see if we can waste some of their time! Keep reading for updates.

Hiring a photographer for any event is a big step that requires great trust. It’s must be VERY disappointing then, when you’ve paid P3,450 in advance for a set of wedding photos, for them not to arrive 2 months later. Even when we got in touch to suggest that the photographer, Mr Takuwa from Lesego Industries should do the right thing, all she got was empty promises. When they were finally delivered they turned out to be of such poor quality that the customer just sent them back. Voice readers beware!
Posted by Richard Harriman at 11:41