“I bought a Mercedes Benz on the 8th of October from a garage in Mogoditshane. After I paid they pretended that the blue book was not in the office and the sales man who assisted me said he was going to fetch it at his house. I waited till it was dark but ended up going home. Until now I don't have the papers for the car only the receipt. Please how do I get help on this matter?”

Who actually owns this car? Did the dealer ever have the blue book? Did he ever actually  own the vehicle that he sold? Is it possible that the previous owner is still the registered owner? Without the blue book, nothing can be certain.

My suggestion? Cancel the deal in writing. Quote S15 (1) (e) of the Consumer Protection Regulations which says that when a deal is properly cancelled the seller must “promptly restore” any money paid up front. Then contact Consumer Protection Unit and complain to them. Then call the Police and mentioned Section 308 of the Penal Code (“Obtaining by false pretence”) and then Section 310 (“Cheating”). See if that has any effect.

“P100 can change your financial situation. CBN is a way to go. Join me today and let me take you through the journey of that financial change. You won't regret taking that decision. Drop your number now. Remember your P100 is a once off.”

Apparently you can join for just R100 and recruit 6 people, “You earn R10 per downline” and then get P60. And then so on, through several levels: 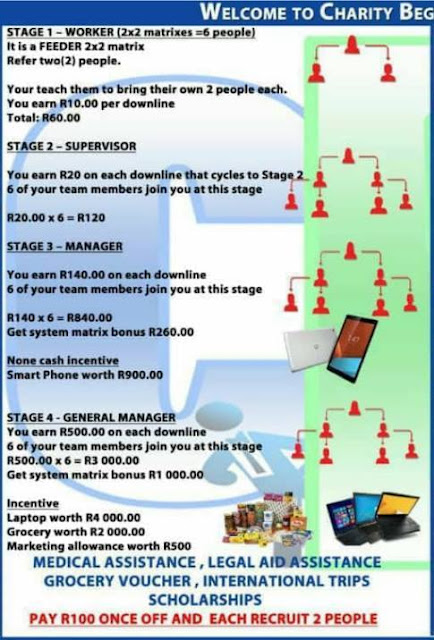 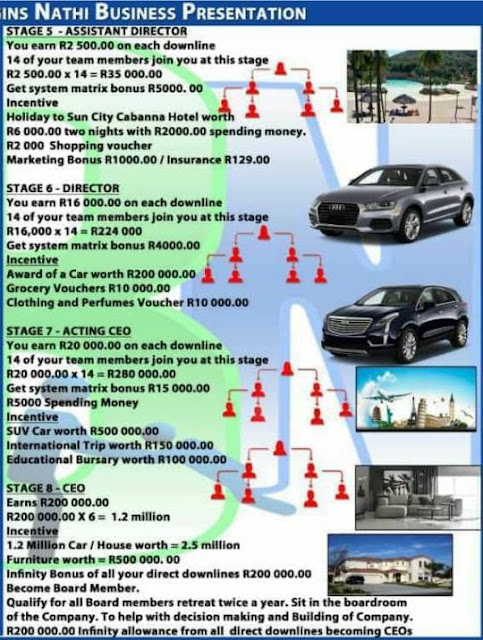 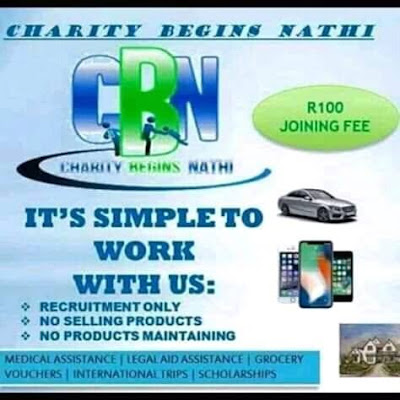 “It’s simple to work with us: Recruitment only, no selling products, no products maintaining.”

Section 9 of the 2018 Consumer Protection Act defines a pyramid scheme as a scheme:

It goes on to warn that:


“A person who participates in an arrangement, agreement, practice or scheme under subsection 2 commits an offence and shall be liable, upon conviction, to a fine not exceeding P100,000 or to imprisonment for a term not exceeding five years, or to both.”

CBN is a blatant pyramid scheme. Please don't risk your money, effort and time. And your liberty.

And some more. Some screenshots of conversations with people marketing CBN in Botswana. 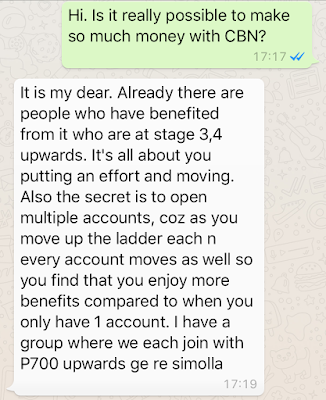 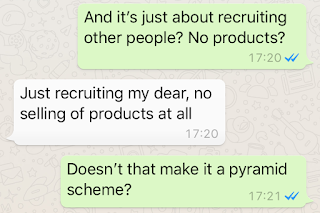 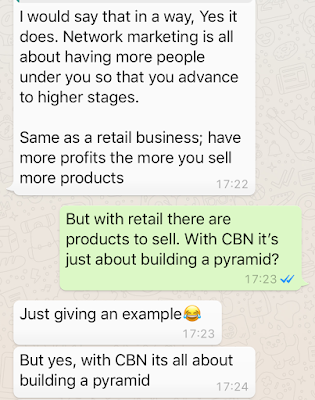 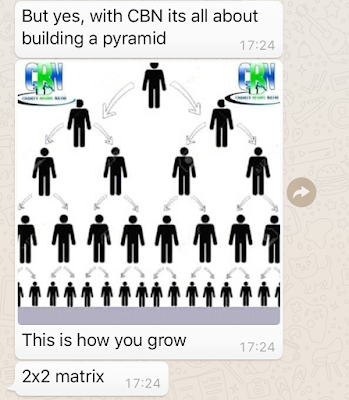 
“My 72 year old mother went to a general dealer to buy groceries, while at the shop she tripped and fell. When she fell she had a bottle of tomato sauce in her hand which broke and severely cut her between the thumb and the second finger injuring 2 arteries. She almost bled to death. I called the owner of the shop who said will come and check us. My mother had 24 stitches to close the wound, was admitted for 4 hrs, now discharged. Other customers said this happened before. What are her rights?”

This is like deja vu all over again. Consumer Watchdog first big issue was very similar to this. Fifteen years ago we heard a similar story of a customer injured in a store. The store failed to respond adequately, we reported this, then received a threat of legal action (which we laughed at), kept pestering them and eventually, after they conceded they had lost significant levels of business because of their poor response and the public backlash, they settled.

It's very simple. It's the responsibility of store, restaurant, hotel, bank, insurance company, radio station, whoever, the protect the safety o their customers.

So maybe the store has a public liability insurance policy and they can claim against that? If yes, the matter is simple. If not, they need to start saving for the penalty a court will impose. Maybe they should settle before it gets to that stage?

We contacted various major store chains (not connected to this incident) to get their reactions. They all told us that they have public liability insurance policies. If an incident happens, they fill in forms, the customer provides medical documents, makes an official statement, a claim is submitted and a payment is made.

BUT it seems that public liability insurances NOT mandatory. This needs to change. Will contact MITI and urge them to intervene. Some might argue it'll be too expensive but I suspect not as expensive as not having it. How much will it cost if a customer is seriously injured, maybe even dies?A lot more than a small monthly premium.


“My brother and my mother went to a store to buy some few groceries. My brother then wrote his phone numbers to enter a competition that is running in their stores. After leaving the store he was called back that he won some groceries and as he was home with the baby cousin, he went with him to the store.

Upon arrival he was thrown into the office after people threw insults at him that he is a thief. He later learned that there was a man who went back to the store and accused him of stealing his wallet. He was not allowed to do anything or attend to the baby cousin, and he was promised a good beating because he stole. He managed to call me during that of which I asked my husband to rush there. When he arrived he found him still in a good state and with the police already there. After looking at the store cameras he was cleared that he did not steal the wallet as he did not even come close to the man who reported him.

Ever since then my brother is stressed and we would like to know which steps he can take for them to pay him back for defamation of character or something along those lines because I strongly believe the store manager should have checked out the store cameras before even calling him.”

Let's remind ourselves of the case of Molefe vs Scorpion Security in 2013. A lady had her bags searched by a security guard as she left a supermarket without her consent. The humiliation of being accosted in public and being accused of being a criminal angered her so much that she took the security company to court.

In his ruling, the judge said:


“I find that indeed the Defendants searched the Plantiff without her consent and it was unlawful. On the issue of damages, considering the humiliation embarrassment and impairment of her dignity as an honest member of society I have considered that P60,000 would be sufficient for her dented image in society.”

Those of us who are not criminals have a right to our "dignity as an honest member of society". If this store wants to avoid a ruling against them, they need to start calculating how much they should pay the guy to keep this out of court.
Posted by Richard Harriman at 17:41