This photography company has really disappointed me and now throws a deaf ear. We had made an agreement to get wedding photos and a drone video from them. They promised within 4-6 weeks we would get our packages. 5 months later we are still waiting for the video. Their contract stated 25% of the full payment balance could be paid once we received everything but instead they had forced my mum to make full payment before receiving anything or else they would not continue making our photos. They don’t answer calls or respond to messages and give excuses and they have our money and we have no video.

When trying to reach them we heard from several brides that they had done the same thing to them. Some still waiting a year for their video. Or some whom have reported them. I just want to say I am highly disappointed that a seemingly “big” “professional “ business such as theirs has gone this route. I have been wasting my airtime and my time chasing them and now I am forced to take them to my lawyers. They would rather be so greedy and fill their pockets with our money than make their customers happy. I wish to warn some brides as I was not warned.

Here we go again. Yet another shady character ruining people’s weddings. I’ve mentioned this many times before but there seems to more than the usual proportion of crooks, liars and cheats exploiting people’s big day. It’s as if they don’t realize that weddings aren’t events like birthdays and Christmas parties that happen again next year. They’re meant to be once-in-a-lifetime events. Ok, maybe twice. They deserve a higher level of care, attention and performance.

I contacted your photographer, who will remain nameless for now, and he told me “We have delivered the photos but only left with the video. It will be delivered before Thursday. Thanks”.

Well, guess what? He lied. He’s now lied to both of us. The Thursday he referred to was LAST Thursday, not this week. You contacted me last weekend to say that he still hadn’t delivered the video footage so I think we need to escalate this issue. We could go to the authorities such as the Consumer Protection Unit, we could use the Small Claims Court or maybe we should use something far scarier? Something that is really likely to make this guy do what he should.

If he doesn’t deliver your video before the next edition of The Voice is published, we’ll name him and his company. Let’s see how he enjoys his reputation being examined by the entire country.

Is this a real loan?

Can you please help me here. Last month I applied for a loan of P50,000 with certain company called Happy Cash Loans in South Africa through online. Last week they replied me saying is approved and before giving or transferring the money they need administration fees of P3,000 from me paid to cover legal issues through Western Union. I just wanted to ask you whether this is good procedure. Thanks in advance for your response. 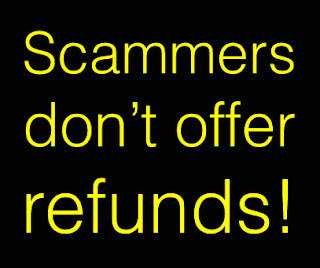 This is undoubtedly a scam. It’s not the first time we’ve reported on these loan scams and the clues are always the same. A company, usually claiming to be in South Africa, but often either in France or in French-speaking Africa (which might give a clue about where they’re based) contacts a potential victim either directly by email or more often by advertising on Facebook. They’ll offer loans ranging from small amounts to millions of dollars, all at incredibly low interest rates and they often say to people with poor credit histories. Like in your case, they offer these loans without any serious background checks on the recipient.

However, the biggest clue is that they want your money in advance. Why would a lender want money from you before they lend you the money? Have you ever heard of a legitimate bank doing that? Obviously there are costs associated with any loan but real lenders absorb these costs, and you pay them back over the period of the loan. You don’t pay them upfront. And you certainly don’t pay anything using the scammer’s best friend, Western Union.

This is all about the fee they want from you in advance. That’s why these scams are called “advance fee” scams. There’s no loan here at all, it’s all about that fee. If you pay it they’ll just keep on inventing more and more payments you’ll need to make until you either realise you’re being scammed or you run out of money. Please don’t fall for it. Instead spread the word to everyone you know that these scammers are out there and this is how they operate.
Posted by Richard Harriman at 13:26