WC Connect describe themselves as:


"an empowerment based membership program".

and that their vision:


"is to empower our members and through them we empower people around them by just introducing them to WC CONNECT".

So are there any products? They make it clear that there is "NO BUYING" and "NO SELLING". They also claim that it's "easy for its members to own houses, cars, laptops, mobile phones and many more without paying a coin. Its all free from WC CONNECT.You stand a chance to own a Brand new bungalow worth $140,000”.

So it's a pyramid scheme.

Many people will remember Vortex Profits, a Ponzi scheme that described itself as:


“a remarkable investment platform with an outstanding track record of 2 years for delivering best of class investment solutions and endless income-generating opportunity”.

They promised returns of between 2.5% and 4% every day, claiming there was some connection with investments in Bitcoin, gold or oil. In fact, Vortex Profits was nothing but a scam and many people in Botswana lost lots of money.


“Have you lost money with Vortex Profits? Final call for submissions. ... complete your complaint form and submit it to PFI Digital (UK) before we submit the letters of complaint to the UK and European authorities. We expect a criminal investigation to be opened and the true directors of Vortex Profits to be brought to justice.” 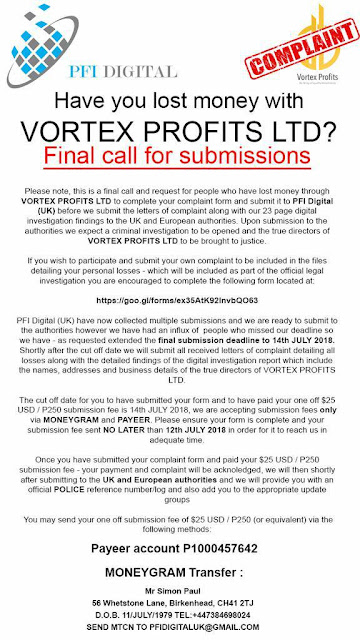 In order for this to take place, the advertisement states that victims must send $25 to the organisers by Payeer or Moneygram.

Furthermore, they offer no more than a Gmail address and a cellphone number. The address they give, "56 Whetstone Lane, Birkenhead" in the UK is actually the address of a YMCA building.

All of these facts confirm that this is a particularly shameless scam that is trying to exploit the victims of the previous Vortex Profits scam. Consumers are urged not to send any money to these scammers.

A consumer started a retirement annuity policy on 1st April 2017. She received a statement showing the state of the policy at 31st March 2018. This showed that she had paid premiums totalling P20,000 but they had deducted "Admin expenses" of P14,000 leaving a policy value of just P6,000. She asked if this was normal?

This is sometimes called “front-loading” and often happens with any investment of savings policy that is meant to last for many, perhaps 10 or 20 years. The sales agent or broker who sold you the policy don't want to wait for 10 or 20 years to get their commission of administrative costs, they want it now. That's why the fees are deducted from the policy value in the first year. A year or two later the premiums will have caught up with the deductions and it will start to accumulate real value. remember that these policies are for many years, not just for a short time.

The problem is that the sales agents and brokers sometimes forget to explain this. That's where action is needed.


“I have been paying an instalment at furnisher shop, and all of a sudden my contract is terminated and I struggle to pay. During the period I was working I really pushed to reach half of the sum. Am now owing 7k, and unfortunately our contracts ended. Should I go to the furnisher shop with letters showing them am still unemployed so that they stop putting more interest in my debt? Am willing to settle the remaining balance, but am still called by finance people reminding me to come pay though am not working. What should I do?”

Talk to them! Arrange a payment plan that you can afford and they can accept. They don’t want to go to court.


“I am having a difficult time with an insurance company. My car was in an accident. My friend, who doesn't have a license, was driving me to the pharmacy and got hit by a guy who didn't stop at the STOP sign. My friend was charged with not having a licence and the guy was charged with negligence. [….] Insurance company told me there is a possibility of them not fixing my car even though their client did take the blame and acknowledged his fault.”

It wasn't just the guy who caused the accident and your friend who broke the law, you did as well. Section 30 of Road Traffic Act says that: “no person who owns or is in charge of a motor vehicle of any class shall cause or permit any person to drive such motor vehicle unless such person is the holder of a valid driving licence for that class of vehicle.”

I suspect that the insurance company might use this as an excuse not to compensate you. My advice is to go quiet and don’t draw attention to yourself, maybe you’ll be lucky!


“My brother hit 3 cars last year while driving to work. He was found guilty by the police. He managed to help one of the owners to fix her car. The other 2 cars were insured so now the insurance companies want my brother to pay money close to hundred and something thousands. Is that allowed please help?”

Yes. The person who causes an accident pays to fix the damage caused. Insurance policies only benefit those who pay for them.

If your brother had his own vehicle insurance policy it would have paid the bills. Now he's going to need to find the money himself from somewhere. This is a very good example of why third-party vehicle insurance should be compulsory.
Posted by Richard Harriman at 18:42