These are just a few of the questions we’ve had recently. Let me know if you think we responded well or not.

“I have been inconvenienced by a bank teller which resulted in the cheque which I wrote not going through. The guy I was paying was very angry with me and didn’t buy my story when I explained that I still have sufficient funds in my account so I was definitely sure the cheque didn’t bounce because of insufficient funds. Please, I need advice; will I be successful if I demand that the bank compensate me for the damages and sufferings I'm going through? In case they refuse to compensate me, is there any possibility of winning the case if I sue them? I also intend to send a copy of this letter to Bank of Botswana. Please advise me in all options that I can use to solve this issue.”

Let’s leave legal action to one side for now. That will just cost you lots of money, bother and frustration. Instead I think you should contact the bank and see if they won’t sort this out for you. If you want we’ll get in touch with them as well and help explain that this has caused you enormous embarrassment. It’s also left you in trouble because giving someone a cheque that bounces is a crime in Botswana. Anyone who receives a cheque that is dishonored can call the Police and lay a charge using Section 23 of the National Clearance and Settlement Systems Act. It’s critically important that the bank take responsibility for fixing this problem for you.

“I received an email from Robert Alfred of Belltown University. I replied to this person to ask how they much they will convince you to pay for their fake diploma and I received several calls from that number from Pennsylvania to send my resume to update my profile, which I will never sent.” 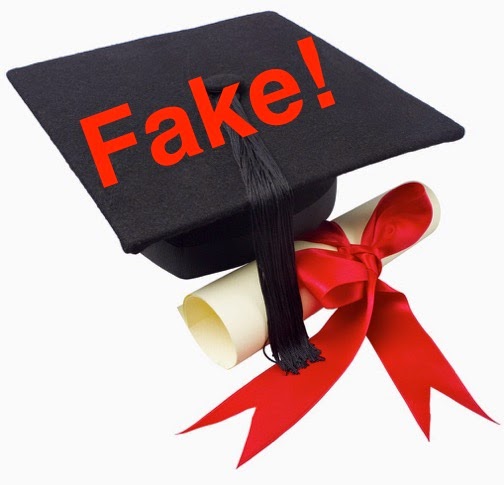 I admire you for noticing that Belltown “University” isn’t a university at all, it’s a complete fake. Belltown, like others calling themselves Headway, Rochville, Belford, Ashfood, Woodfield are all just web sites designed to sell fake qualification to people gullible or crooked enough to think that they can get a qualification without doing any work to earn it. I had an online conversation with a representative of Belltown in 2013 when they told me that without sitting any exams or doing any coursework I could “get a Masters degree in Psychology to get a promotion”. All I needed to do was give them my credit card number and pay them $274.

The bad news if you are tempted to fast-track your career using a fake degree is that if your employer ever finds out they can fire you instantly and call the police to charge you with fraud. You’ll have stolen the money they paid you when you lied to them about your qualifications. Is that a risk worth taking?

“Please may you let me know if it is legal to have an office tenancy lease without an exit clause? My husband and his partner rent offices in Francistown and last year they wrote to the landlord to terminate the lease but we're told they couldn't because the is no exit clause so they can't leave before two years is up.”

I’m afraid that the lease agreement that your husband and his partner signed with the landlord is a contract and they’re committed to it.

Did they actually read the contract before signing it? I’m sure they would have noticed that there was no escape clause allowing them to terminate the lease before the two years had completed.

Think of it this way instead. Do you think that the landlord should have been able to change his or her mind halfway through the lease agreement and kick your husband and his partner out? Or do you think he should have honored the agreement? It works both ways.

“Who pays compensation in the event that a bag put on a bus shelf by its owner falls on top of another client resulting in their glasses being broken? Is the compensation paid by the bus owner or client who put his/her bag on the shelves?”

I think it probably depends on who was negligent. Was it the client who placed the bag on the shelf carelessly and allowed it to fall on you? Perhaps it was too big for the shelf? Or perhaps the shelf wasn’t attached to the bus properly and it collapsed? It depends on various things. You should also check to see if the bus company has a disclaimer saying they’re not responsible for any loss or damage caused while you’re on their buses. However, even if there is such a disclaimer it can only go so far. Imagine that a company had a sign saying that if you fail to pay on time they can have you shot. Would that be a legal disclaimer? Of course not.

I suggest that you contact the bus company and ask them what their policy is on these issues. If they don’t give you a good enough answer let us know!

And finally, the question we frequently receive.

“What do you charge for helping people with their problems?”

It’s very simple. Consumer Watchdog has never, does not now, and will never charge consumers for anything we do to help them. Everything we do for consumers is entirely free.

And it always will be.
Posted by Richard Harriman at 11:53