In January I paid a supplier over P90,000 for farming equipment for my land. Unfortunately it took longer than I planned to clear my land and the Land Board refused me a certificate until the land is 100% cleared. I went back to the supplier and asked them to cancel the deal and refund me my money. None of the products I bought have been delivered yet. I told them that I desperately needed a refund to help me clear the land since I was short of finances. Instead of giving me a refund the supplier told me that I could not be refunded but instead they would only give me part of my money, P21,000, saying I should find a buyer for the rest.

They never told me there could be no refunds in any of their paperwork that I signed. I therefore appeal to you to assist me in getting back my money.

It seems to me that this supplier is being totally unreasonable.

It’s obvious from the paperwork you sent me that none of the items you bought are perishable. You bought gum poles, shade netting, cables, wires, nails, twine, a hydrant and an irrigation unit. Do ANY of these items go off, like food would? If you’d bought something that expired, went bad or became toxic if it was left unused I might think differently but I can’t see this in your case. Given that ALL of these items are still in their depot and are probably even on the same shelves as the items they haven’t yet sold I think they’re being totally unreasonable.

I’ve written to them on your behalf asking for their side of the story and reminding them that Section 15 (1) (e) of the Consumer Protection Regulations states that a supplier fails " to meet minimum standards of performance” if, when a deal is cancelled or terminated they fail “to promptly restore to the consumer entitled to it a deposit, down payment, or other payment". I’m sure they know this, don’t you think? 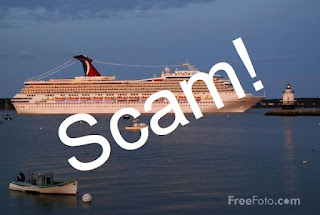 A reader got in touch to ask about the authenticity of an email he received. This claimed to be from “Carnival Cruise Lines” and informed him that they have “23 Fun Ships operating voyages ranging from three to 16 days in length to The Bahamas, Caribbean, Mexican Riviera, Alaska, Hawaii, Canada, New England, Europe, and Bermuda.”

It went on to inform him that:


“We seek to write to your response on a Job opportunity … There will be no interview required since this is manpower job where anybody is fit to work.“

These job offers seemed remarkable. It claimed they had vacancies for everyone from cleaners to chefs, nurses, doctors and engineers and the salaries they ssuggest are stunning. A cleaner, they say, will earn:


“US$28 (Twenty Eight Dollars) per hour and you will work for 8 hours per day and also there is a chance for overtime if you have the strength.”

They claim that the better jobs will earn “$40,000.00 - $100,000.00 US$(quarterly) depending on qualifications and experiences negotiable”. That would mean salaries up to P3 million per year.

Do you believe this? No, neither do I.

Carnival Cruise Lines IS a genuine company that runs cruise ships around the world and yes, they do indeed need staff but this email is nothing to do with them. This is a scam, there’s no doubt about it. We’ve seen this one several times before. Sooner or later the scammers would demand an “advance fee”, in this case it will probably be for a fake visa or for a uniform. Whatever it is it will be fake, just like the rest of the story.

If you visit Carnival’s web site and click on the “Careers” link the first thing you see is a warning about scams like this one so clearly they’re concerned about this as well.

If you get an email like this, offering you jobs out of the blue without the need for qualifications or interviews just delete it and don’t give it a second thought.
Posted by Richard Harriman at 07:21