I’ve been taunting people again. Not scammers this time although that remains a popular pastime in my household. It really is spectacularly amusing and satisfying to unleash all your frustrations on someone who deserves complete contempt. That’s the key thing to remember. You and I, our friends, family, neighbours and workmates, even the people you bump into on the street all deserve at least some basic respect. Those little courtesies are a major component of our culture and they are something we must struggle to maintain as our country develops and changes.

But scammers are different. Scammers are scumbags. They are revolting, low-down, pond-life. Scammers deliberately seek to abuse and exploit us. They have no shame, no scruples, no morals. They not only don’t deserve respect, I think they actually deserve our active disrespect. They deserve to be insulted, ridiculed and abused. The only form of defence against such people is attack and I think it’s time we took the battle back to them.

A few weeks ago we received details of a scammer calling himself Tabiso Mbkeo who claimed he worked for “American Express Bank of South Africa” and he had a business proposal for me. His silly story was that a Dutch businessman had visited South Africa during the World Cup and committed suicide after his national team lost to Spain leaving lots of money that my good friend Tabiso wanted to share with me.

Of course this is a scam, we all know the story by now. However the funny thing is that I called him on his South African cellphone number and asked him how many people fell for his nonsense. He tried arguing for a long time but he didn’t seem to understand that I knew he was a scammer. When eventually he realised that I wasn’t a potential victim he got angry and started insulting me. I later decided to be as rude as possible and suggested that his romantic predilections were somewhat colourful and involved various farmyard animals. That’s when he became very angry indeed, started calling me, threatening to call the police because of my insults (the irony!) and then hinted that he wanted to kill me. Then things became totally surreal. He was so offended by my insults that he got his wife to call me and assure me that his nocturnal desires were not as eccentric as I suggested.

Before you object let me remind you of the sort of person I was dealing with. This piece of excrement would take their last thebe from widows and orphans. He’s a thief. He has no feelings, no conscience and no sense of right and wrong. He deserves to be insulted and ridiculed. His phone number is +27 735 990 807. Why not send him a text message and tell him what a scumbag he is?

But it’s not just scammers that I think deserve contempt and action. So-called traditional healers deserve it as well. I mean the loathsome leeches that advertise their services in the papers, offering cures for cancer, fertility problems and all sorts of other problems. We’ve all seen these adverts, they all seem to include a mixture of the magical, the romantic and the sort of medical breakthroughs that, if they were true, would win the “doctor” a Nobel Prize for Medicine.

Last week’s selection included a “Love me padlock (for women only)”, “Muti that attracts white lovers” and a selection of treatments for fertility problems, pregnancy problems and an endless supply of remedies for what I should probably call “performance issues”. I’m sure you can imagine what that means.

Now we all know, don’t we, that this is all utter crap? These people aren’t healers or doctors or anything remotely similar. They are just scammers. They offer something that doesn’t work for money. That’s a scam.

What’s more, they also share another quality with scammers. They prey on our basest instincts: greed and desperation. These charlatan healers offer us solutions to problems that terrify us like disease, misfortune and, for guys at least, failure to “perform”. They take our money for fake remedies to these situations so how are they different from a scammer? 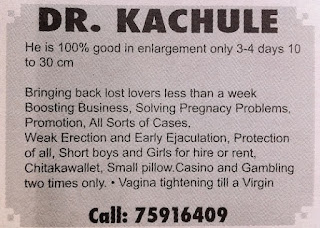 They’re certainly NOT different in their responses to criticism. Last week I read a whole bunch of these advertisement and sent a simple text message to all the advertisers, saying that they were breaking the Consumer Protection Regulations, the Witchcraft Act and my favourite sections of the Penal Code. Sections 396-9 of the Penal Code outlaw what are called “prohibited advertisements” which it defines as “any advertisement of any medicine … offering to administer any treatment … for any of the following purposes”. The purposes include any “genito-urinary disease”, cancer, TB, epilepsy, heart disease and “any habit associated with sexual indulgence, or of any ailment associated with those habits or for the promotion of sexual virility, desire or fertility”.

In short, exactly the sort of thing most of these lying crooks offer. 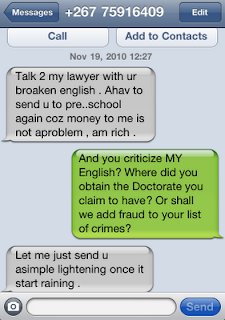 Just like the conventional scammers, these charlatans don’t like being confronted. I texted all the advertisers these crooks telling them that they were operating illegally. The response was mixed. Some ignored me but others actually responded. “Dr” Khamisa (75957988) responded by text message saying “I no the law tel the police to cm nw” and “I dnt hv the that time my frnd do wht evr”. “Dr” Mama Ibin (74273568) actually phoned me claiming that his medicines are just for Africans and wanted to know where I was born to see if I was qualified to comment.

Most amusingly “Dr” Kachule (75916409) threatened to have me struck by lightning next time there was a thunder storm. Unfortunately his magical aim has been a bit off recently because I haven’t been hit yet.

Am I scared? No. Because he’s as scary as a goat-bothering scammer. Pathetic and not worthy of respect. Why not SMS him and his charlatan colleagues and tell them what you think of them too? Don’t mention goats, choose your own animal.
Posted by Richard Harriman at 17:16