I get a death threat 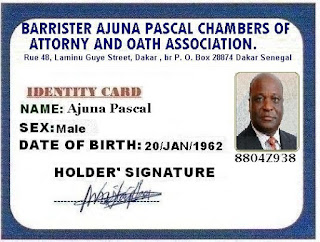 From a scammer calling himself "Ajuna Pascal" in Senegal.  Not very scary actually.  I called him and pointed out the various mistakes on his fake ID card.

It's a long story but his scam story is that he's a lawyer acting on behalf of a girl in a refugee camp whose late father was a politician with money in a UK bank account.  The potential victim contacted us for advice.  All the scammer wants is $378 to pay the "oath fee , Notary and stamp duty fees".

I accused him of being a liar, a scammer and a cheat and that's when he got angry.  He says he's coming to get me and to "sort me".

A Google search for either his fake name or his supposed office address finds various references to him on scam warning sites.

It's a straightforward advance fee scam but the threat was amusing.  If you feel like sending him a message his phone number is +221 775 935 822.
Posted by Richard Harriman at 10:43