I’ll start by being positive. There are plenty of stores and suppliers who understand that they should be nice to customers. They understand that customers give them their hard-earned money in return for something, that trade is a two-way street. I have some money, you have a product or a service I want, we meet and if the price is right we’ll do a deal. It’s based on some mutual respect and understanding. Most suppliers understand this. Most even truly believe it.

Some others are a bit more cynical. They understand that their financial survival is based on customer’s money and they’ll just pretend to care about us. While I obviously prefer those companies that are genuine, that really mean it, frankly I don’t care very much. So long as I get a good deal I’m not too fussy. I don’t make any particular moral demands on suppliers, just legal ones.

Then there’s the final group. There are certain companies that just don’t give a damn about their customers, they just want the cash and don’t care very much whether the customer walks away happy, or remains happy for very long.

There’s a certain store near OK Foods on the Western Bypass in Gaborone who sold a customer a fake Apple iPhone. In fact it wasn’t even that, it was a fake of a fake iPhone. When the customer realised she had been sold a fake (although frankly at the price she paid she should have been suspicious) she took it back for a refund and they just threw her out of the store. That’s fairly contemptuous I think.

Obviously multi-level marketing schemes and pyramid schemes treat their customers, sorry I mean victims, with contempt. If they had any real respect for them they would openly disclose the figures they have internally about the earnings that members of the pyramid will earn. A few of them actually do this now but only because courts and regulators around the world have dragged these details out of them kicking and screaming. That’s why we know that only a tiny percentage of Amway and Herbalife distributors actually make any profit and the few that do are the ones lucky to get into the pyramid early enough.

But maybe you’re thinking that this is just the less reputable end of the business spectrum? A well-known, international company with a brand and a reputation to maintain would never treat their customers with contempt, would they?

Readers of this column will recall the Hyundai Rustenburg saga. You can see the details in previous columns and on both the Mmegi and Consumer Watchdog web sites but the basics of the story are simple. 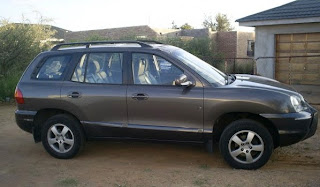 Last October a Hyundai owner broke down in Rustenburg and wisely took her car to the nearest Hyundai dealership for repairs. A year later and despite giving them a total of P20,000 she still hasn’t got her car back. Twice she went to Rustenburg to pick up the car and twice it broke within the Rustenburg city limits. IT was a catalogue of disasters. They even lost the crankshaft at one point.

Now they claim that there is another fault with the car, one they curiously failed to notice when they first got the car and curiously failed to notice on both occasions that they said they had repaired the car and that it was ready to take home. They claim that the owner needs to pay them another P6,000 to get her car back. Despite repeated requests they have failed to give her a complete breakdown of the costs.

After many, MANY emails, several articles in Mmegi and a lot of patience Hyundai promised an investigation which concluded that she still had to cough up the cash, ignored one of the occasions she picked up the broken vehicle and generally whitewashed Hyundai Rustenburg.

Last week I wrote about this case and reported that nothing had recently happened. Just before last week’s article something DID happen. Another email came in from Hyundai in South Africa, the full text of which you can read on our blog. Here are the highlights:


“I would like to advise that Hyundai Automotive South Africa does not have any legal obligation towards a vehicle we did not sell. (…) It was noted immediately by our representative that went out to inspect the vehicle, that it was not a vehicle imported by Hyundai Automotive South Africa. Nor did I know that this vehicle was not one of ours when I first responded.
This specific vehicle was traced back to Malaysia where it was scrapped and sent to Botswana. This constitutes a “grey imported” vehicle. It is against the policy of Hyundai Automotive South Africa to do any repairs to a grey imported vehicle. Our dealers, including Hyundai Botswana, has strict instructions not to work on these vehicles as we cannot guarantee the condition of the internal workings of these vehicles prior coming into our dealership. We pride ourselves in the vehicles we sell and the quality of the vehicles we sell.
Our dealer in Rustenburg is an independent dealer and does not have the means to check whether a vehicle is one of ours or not and therefore offered to repair the vehicle to assist the customer, without being informed that this vehicle was not sold by Hyundai Automotive South Africa.
Loyalty is a two way street, Sir! With the above in mind, kindly note that this case has been closed on our side.”

It also means, in my not even slightly humble opinion that Hyundai are showing utter and complete contempt for a Hyundai owner.

I think we should all show them the same level of contempt back, don’t you? Do you really want to buy a vehicle from a company like this?
Posted by Richard Harriman at 11:17