Is this a genuine job offer?

I received an email from Al Zawali Construction in the United Arab Emirates saying that my “qualifications and experiences which you submitted online matched the requirements for our on going employment”. I don’t remember submitting my details online so do you think this is genuine?

It’s a genuine scam, that’s for sure. 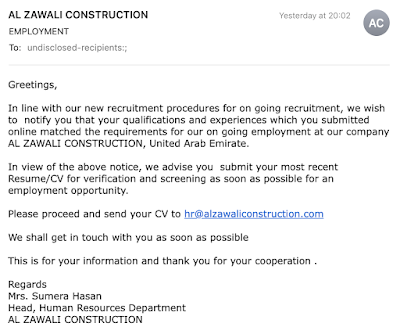 Here’s a simple truth. Employers don’t contact total strangers offering them jobs. The email you sent me contained a few clues that it wasn’t genuine. Firstly, the email didn’t include your name, it just said “Greetings”. if it was true that they saw your details online, don’t you think they would know your name? Then they ask you to send your CV. Surely, if this was genuine, they’d have seen it already?

Then there’s the language they use. “qualifications and experiences”? “for our on going employment”? Does that sound like a well-educated HR professional to you? It doesn’t to me.

There are other clues that you need some cyber-detective skills to notice. Their web site says that “Over thirty thousand(30,000) employees have worked at the company for over 10 years and nearly half of the 1000+ employees have worked at Al Zawali Contruction Company for more than five years” but their
domain, alzawaliconstruction.com, was only registered on 2nd March 2019. And they can’t spell the name of their own company correctly!

This is the beginning of an advance fee scam. Sooner or later they’ll demand money from you in order to obtain the fake job they say they’re offering. They’ll probably say it’s for a visa or legal fee and that’s what this scam is all about, that advance fee. Even if you pay them it won’t stop, they’ll keep demanding money until you either realize it’s a scam or you simply run out of cash. Please don’t waste your time and money.

Is Donations for Wealth real?

You’re not the first to ask us this. You won’t be the last. 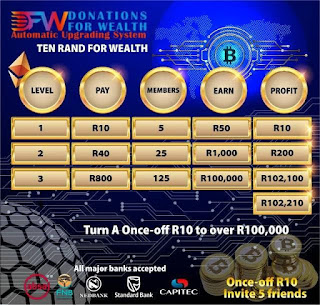 Donations For Wealth describe themselves on their web site as "a 21st Century Donation system and Crowd Sharing Platform” and that “Now Here's A Sure Way To Get The JUMP On a Money Train & Start Making More Money Than You Ever Thought Possible!”

They claim that their business “brings forth a new way of raising funds for various causes, whether it is for personal needs or a host of worthy causes, such as Paying off Debts, Groceries, Holiday, Weadding, Buying a car, churches, schools, non-profit organizations, etc."

This is the language used by Ponzi schemes. You “donate” money into the scheme and somehow, perhaps magically, greater amounts of money come back to you. For instance they claim that you can “Turn R10 into R100,000“ without explaining how this might be possible. They then claim that recruits can “Turn R100 into R40,000” which is surprising as it’s less than the first offer for a bigger “donation”. Perhaps most impressively they suggest that you can “Turn R5 into 2 Million”.

Like other Ponzi schemes they don’t even attempt to explain how the money they claim you can make is generated. That’s because like with other such scams the only source of new money is from the people who join after you. That’s where they get the small amounts of money they might offer you in return for your “donations”. That’s how a Ponzi scheme works.

Like all Ponzi schemes Donations For Wealth will collapse. Their domain was only registered in February this year so they’ve had a couple of months to steal people’s money. I predict they’ll be gone with victim’s money in another few months. Please don’t be one of those victims!

Also, remember that Section 9 of the Consumer Protection Act outlaws Ponzi schemes as well as pyramid schemes. Do you want to run the risk of a fine of P100,000 or five years in prison even for just joining a scam like this one?
Posted by Richard Harriman at 09:57