This is the 605th and final Consumer Watchdog article in Mmegi. After twelve and a half years, we’re calling it a day.

Things change and there are some who don’t like that. They like things always to remain the same, never changing. They don’t enjoy new experiences, they don’t like innovation and they don’t welcome anything that forces them to think about things in new ways.

I’m not one of them.

I’m the exact opposite. I love novelty. I love the fact that almost every day we read of a new invention, a new discovery or learn about a new idea that helps us understand the world and its people in better ways. I loved it when Mmegi invited us to start writing a column in 2005. It was new challenge, it forced us to think differently about the way Consumer Watchdog spoke to consumers and it made us think very carefully about what Consumer Watchdog really was.

Not everyone liked what we did, that’s very clear. The threats of hellfire and damnation we got from certain suppliers after we criticised them were surprising and when some of them became formal legal threats we were shocked. Did they really think that engaging an attorney to threaten us for exposing their shady dealings, poor service delivery and questionable ethics would make us change our minds? Or apologise? Or retract what we’d said? Were they serious?

Some of them really were.

But we didn’t change our minds, retract or apologize and much of the thanks for that was the support we always got from Mmegi editors like Mesh Moeti and Gideon Nkala who saw every time that what we’d said was correct and justifiable. They had our backs and I’ll thank them for that over and over again.

Being with Mmegi also allowed to confront a number of issues that really were threatening our welfare. Before NBFIRA came along uncontrolled loan sharks were a big issue, some charging 30% or more interest every month. The failure of stores selling things on hire purchase to abide by the legal requirement on them to disclose the total cost of purchasing was universal. When we told them about it, some were remarkably cooperative, others less so. The South African chain of stores who told us that it wasn’t relevant to them because they were governed by South African law, even while operating in Botswana, was a surprise but that silliness didn’t last long when we explained that in Botswana our laws apply, not someone else’s.

Then there were perhaps the greatest threats to our safety, the so-called “traditional doctors” who advertised their preposterous potions in various newspapers (obviously never Mmegi though). They had products, or so they claimed, that could enlarge the parts you wanted enlarged, shrink the parts you wanted shrunk, find lost lovers, do away with business rivals and win you tenders. More worryingly, they also claimed that they could cure a variety of diseases, ranging from STIs to cancer, heart disease to epilepsy, hypertension to AIDS. It was one of the crooks selling a AIDS cure that prompted us to write an open letter to the Commissioner of Police about him, describing him as a “clear and present danger” to the health of the nation. I’m not sure whether it was addressing it to the Commissioner or copying it to the President that had him arrested and deported but either way that was a result worth waiting for.

Luckily you hardly see those adverts any longer. Partially it’s because newspaper editors took a lead from Mmegi and saw them as dangerous but it was also due to the most significant change to our lives after better healthcare and education. The rise of social media and the freedom it offered us all to say what we feel, whether it’s good or bad. Nobody knows exactly how many people use Facebook in Botswana but I’d place a bet on it being close to half of the population. And that has changed everything. Those people are now connected to the rest of the world in a way that none of them could have predicted and which many of them don’t even realise.

That’s had an obvious effect on communication, allowing us all to connect with the people that matter, wherever they might be in the world but it’s had an even more dramatic effect on the way business is done. Gone are the days of stores, banks, insurance companies being remote, hard to contact and unaccountable. Now, with a few clicks on your keyboard or your phone you can comment, criticise and celebrate a company for the way they’ve treated you.

And there’s nothing they can do to stop you. Nothing. For the first time in history, the power situation has completely reversed between the companies selling us things and us consumers. We are now the ones that are in charge. If a bank, a cellular network operator, a restaurant or even a government department disappoints or offends us, we can make our complaint public, available for the entire world to see immediately and for free. 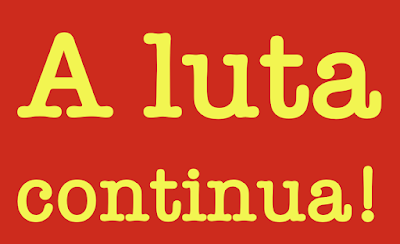 That’s also changed the way Consumer Watchdog operates. We get hardly any letters or faxes these days and even the number of emails has dropped noticeably. Facebook is our primary way of communicating with the public. And that’s not going to change. There won’t be another Consumer Watchdog column in Mmegi but our social media presence is just getting bigger and bigger. If you haven’t already, come and join the group and continue the conversation.

So farewell, readers of Mmegi and fare well. Remember that consumers have rights but that those rights only matter, are only worth the paper they’re written on, if they are enforced. And the only way to have them enforced is to make noise when they are ignored or abused. It’s up to you and me to stand up for ourselves and for those we care about.

A luta continua.
Posted by Richard Harriman at 11:00