Whose job is it to fix my fridge? 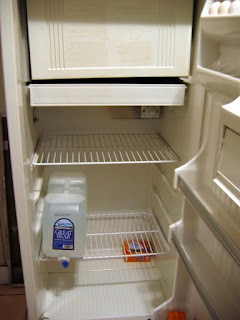 Hello. Please advise. On March I bought a Samsung fridge and they delivered it to my house. Immediately after I switched it on it gave a horrible sound. I reported it to the store and they sent their agent to my house to check it and he told me it is the compressor. I then went to Samsung and asked about it and they told me its not the compressor and the fridge might have a fault. Then I reported this back to the store and they sent the same guy to my house. He came and opened it and then he told me if the sound persist I should call him. It did and I called him and he told me they have to collect it from my house to fix the problem at their office.

Well I demanded a refund or exchange because they are going in circles. I told them I can’t expect a new fridge to be fixed. Now the manager is telling me that if they have to give me a new fridge they have to be given authority by their agent. Firstly I didn’t buy a fridge from their agent and I did buy from them. What can I do?

I’m sorry for your trouble. Unfortunately, we hear this story very often. You buy something brand new and then it goes wrong and the store start doing their best to confuse you about your rights. The most important thing to understand is that you bought the fridge from the store. Not from their agent, not from the manufacturer, you bought it from the store and it’s therefore the store’s job to fix any problems that occur.

Section 17 (1) (d) of the Consumer Protection Regulations says that an unfair business practice if a supplier causes “a probability of confusion or of misunderstanding as to the legal rights, obligations, or remedies of a party to a transaction”. Telling you that you must speak to another company, that they need to involve someone else in their decision-making, that you have to run around and do their work for them is an unfair business practice, don’t you think?

Unfortunately, one weakness in the Consumer Protection Regulations, an area where we fall behind some other countries, is that when something like this happens you don’t have the right to demand a particular solution. The store has the right to decide which of the three Rs they offer you: a repair, replacement or a refund. You don’t get to make that choice. Meanwhile you deserve a working fridge.

We’ll get in touch with the store for you and see fi they can’t be a bit more helpful and give you what you deserve.

I just want to find out if it's possible to help my dad on a banking issue. The bank over deducted close to P200 000 and they actually agree that they made a mistake in making him pay over and above the actual owed sum but instead of paying him back the money, they have been giving him the run around for over 6 months now.

What happened is that my dad took a loan some years back but even after completing the payment, they continued deducting for over 10 years and when my dad eventually figured out what was going on, they apologised but continued to deduct and only stopped after a while. What can he do?

I’m glad I was sitting down when I read your message.

That really is a staggering level of incompetence. I admit I’m not an expert on banking computer systems but surely the system knows to stop deducting when the outstanding balance reaches zero? Unless they entered the wrong details when they first set up the loan but either way they’ve let your father down badly.

Secondly, when an organisation realises that they’ve made a mistake, particularly one as massive as this, I think they should be doing their best to fix it now. Right now. Not after they’ve had a cup of tea, not next week, next month or just when they feel like doing so. It needs to be fixed the moment they’ve checked the facts and ensured they’re not being scammed. And then they need to apologize. And no, I don’t mean an apology from a low-level member of staff. For a mistake that cost P200,000 I would expect the CEO on the phone expressing their concern, regret, humble apologies and a promise that it will never happen again.

And don’t forget that your Dad could have been earning interest on that P200,000 so I’d expect them to pay him that as well.
Posted by Richard Harriman at 10:20