Sometimes we get that feeling as well. We just know we’re doing something right. 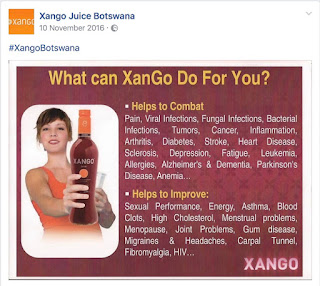 The first piece of good news was about Xango, a juice marketed using a multi level marketing scheme. We reported and broadcast about Xango in February and March, warning people to avoid it. If you believed what its salespeople were saying, Xango really is miraculous. Its proponents say it can “combat” cancer, diabetes, leukemia, Alzheimers and dementia and can even “improve HIV” although I don’t think they’ve thought that last claim through properly. It can “improve HIV”? I’m not sure that’s what they really mean. However, whatever they think it can do, it obviously can’t do any of these things. If it could, someone would have been awarded the Nobel Prize for Medicine by now and probably the Nobel Prize for Peace as well. They would deserve both. And for P350 for each bottle I’d expect something wonderful to happen with every sip.

Products like Xango are dangerous and the people selling them should be ashamed of the things they’re doing but the good news is that they’ll soon stop. In March the Xango head office sent out an urgent message down through their pyramid instructing them “to remove all health claims about Xango ASAP”. Clearly they realised that such claims were dangerous. Or maybe just likely to threaten their profits.

Just last week things went even further. A press release from the Ministry of Health and Wellness pointed out that Xango juice was being “sold across the country without the approval of the Ministry of Health as a medicinal product”. It went on to say that the public “should be aware that the product is just fruit juice blend and does not have proven medicinal properties and therefore cannot be marketed and sold as such.” They ended by asking people to report anyone making these preposterous claims about Xango juice to the Drugs Regulatory Unit, the Food Control Unit and the Police. 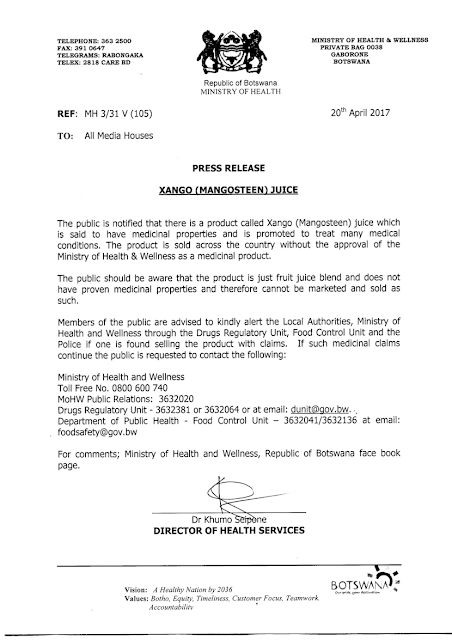 The silly thing is that if they’d just sold it as a fruit juice that’s full of vitamins and nutrients and that tastes really good nobody would have had a problem, certainly not me. It was those dangerous claims that outlawed the product.

So a pat on the back goes to the Ministry of Health and Wellness for taking action to protect us all.

Another sign we’re doing something right was the opposite experience. We got attacked.

Earlier this month we commented on an award scheme called the “International Quality Summit Award”, run by a company in Spain called “Business Initiative Directions”. Various people had received surprise emails from BID, announcing that they’d won an award and inviting them to collect it at a gala dinner in New York. It was never entirely clear how they’d won, what criteria had been used to decide the winners and what qualified the company to award anything. 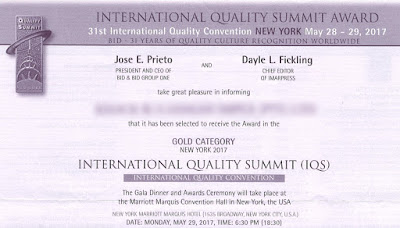 In Mmegi a few weeks ago I mentioned this and also reported the extraordinary cost of receiving the award.

The attachments in the award email explained how award winners would get to attend the two-day event in New York. They would start by paying the company “participation costs of 4,200 euros” to attend. That’s about P45,000 and for that they’ll get “Two invitations for the IQS Gala Dinner Ceremony”, a trophy, a certificate, a manual of graphics they can use to market their award, a press release, some photos of the winners getting the award, “two gold-plated lapel pins”, an opportunity to speak at the ceremony and two nights in the Marriot Marquis Hotel where the ceremony will take place.

The small print then explained that the hotel accommodation “will be provided in one double occupancy room”. So, in summary, for P45,000 the winners get dinner for two people, two nights in a hotel room that they must share with a colleague, a trophy, two lapel pins, some photos and a whole lot of paper. And then there’s the travel costs. In total, I reckoned the total cost of receiving the award would be about P75,000.

But maybe that’s what it costs BID to run the event? I don’t think so. I checked the hotel and the costs of the room would be about P6,000 and even when you add on the hire of the conference rooms and all the trinkets winners receive, I suspect that BID make a profit of at least P30,000 for every award they give away to the companies fool enough to part with that sort of cash for the privilege of attending.

So that’s the background. Then came their response. On their Facebook group they posted a long, rather incoherent message about us.


“The so called Consumer Watchdog Botswana is part of BES a company that provides consultancy and marketing oriented services for companies. They are NOT an NGO and what they really are is the enforcer of sorts for BES. A communication bully that denounces companies and organizations and forces them to buy BES services to be release from their constant online attacks.”

They go on to suggest that what we do is to use “the fake NGO Consumer Watchdog Botswana to denounce a company, claiming that they have low quality, that their are a scam or any other absurd claim. Then they use BES to offer services in marketing and training ‘to improve’ the company.”

They end by saying that we “are not evil per se, but it is shameful that they have to blackmail companies into it.”

Obviously none of this is true but do you get the impression they’re angry? I’m not surprised. Not only did we call into question the merits and values of their awards schemes but I imagine they’re unhappy about something you find on Google. If you search for “Business Initiative Directions” the first hit is their web site and the second is a warning about them from us in 2010.

You know you’re doing something right when the bad guys get angry and attempt to get their revenge.
Posted by Richard Harriman at 11:46