It really is a constant battle. You and me versus all those people out there who are doing their best to steal our money.

The bad news is that there’s no real good news. Even though we often see the end of a scam another one quickly appears to take its place. Almost as soon as Eurextrade collapsed it was replaced by “Oil Of Asia” which luckily never really got off the ground and collapsed soon afterwards. The bizarre irony is that many of the people who “invested” in Eurextrade then moved straight on to Oil Of Asia, presumably becoming serial victims.

I heard from one person who confessed that after losing a massive P300,000 with Eurextrade, he moved on to Oil of Asia and gave them P7,000 before they collapsed. I simply don’t understand how someone can do that, how they can be that gullible. After losing so much you think someone would crawl away and hide for a while, don’t you? Clearly in some people the gene for gullibility is a strong one.

Bizarrely, the Eurextrade is still being sold. I heard that some of the people who were recruiting further victims are still at it, promising the same miraculous profits, despite the scheme collapsing months ago. Clearly some people are so desperate to recover some of their losses they’re prepared to lie and steal from their neighbours.

It’s not going to work though, because the payment mechanism used by Eurextrade, Liberty Reserve, was recently shut down by US authorities. They said Liberty Reserve “was intentionally created and structured to facilitate criminal activity”, not just for Eurextrade but also for a range of other money-laundering activities. The authorities reckon that over $6 billion had gone through Liberty Reserve’s coffers.

But the removal of one payment mechanism just allows another to take its place. The BBC reported that “security experts have suggested a Moscow-based service called WebMoney is emerging as the favoured replacement”. If not that then the crooks are likely to start using BitCoin, a “virtual currency” that also promises its users secrecy from the prying eyes of law enforcement.

The scammers behind Eurextrade certainly aren’t going to give up. This wasn’t a once-off scam for them, they have a history of criminality. They were also behind a Ponzi scheme called Rockford Funding that the US Securities and Exchange Commission claimed had stolen over $10 million from “investors” and transferred to banks in Latvia. They’ve also been involved in shady dealing with oil rigs and pharmaceuticals. It gets worse. They were also involved in chartering a ship that transported weapons from Eastern Europe to Mombasa in Kenya, to be used by rebels in South Sudan who were then under an international arms embargo. Criminals as professional as these gun-runners don’t let one setback stop them.

But not all schemes and scams are as sinister as these. Multi-Level Marketing schemes like Amway and Herbalife are already well established but the smaller one are being sold in a much wider manner now their representatives have access to tools like Facebook. 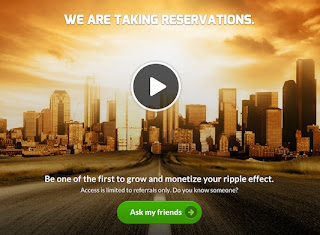 In the couple of hours before I started writing this I saw a schemes calling itself RippIn being promoted in a Botswana-focussed Facebook group. This scheme deliberately hides what it’s all about with tempting suggestions like “By reserving your spot now, you have the chance to start growing your ripple TODAY, before the rest of the world!” Who wouldn’t want to be an early adopter of something as tempting as “growing your ripple”?

It’s also made clear that RippIn is only available to a select few. Only people invited to join will be allowed in. Smart move. Making something exclusive and selective is a very good way of building loyalty, particularly when there isn’t actually anything there. It’s one of the many ways in which Get Rich Quick schemes are like religious cults.

Also like cults, these schemes are there to make money. I was finally able to find a hint that it costs either $300 or $900 to join whatever RippIn turns out to be depending how important you want to be. You then get paid $80 or $240 for the five recruits you get to join.

Without a product and with the joining fees it’s safe to assume this is nothing more than a pyramid scheme and we all know what happens to them.

More locally, we have a problem at the moment with auditions. A recent Mmegi Opinion column reported that “some unscrupulous characters who are taking advantage of talented but desperate young people out to get exposure. Most of these are unemployed youth fresh from high school, university or those who have been looking for jobs for years. Some of the companies make the aspiring actors pay for auditions whose results they never know. For instance, they are made to pay for auditions for music shows, or acting, and they come in huge numbers to try their luck. Along the way, these companies make huge sums of money from struggling young people most of whom cannot make ends meet.”

This is simply NOT how the industry works. Legitimate production companies make their money from making films, putting on shows and selling their recruits like modern-day slaves. Legitimate companies don’t make the recruits pay to be recruited. Only suspicious ones do this. Given also that many of the recruits are young women you can imagine the risks of sexual exploitation.

It’s actually quite simple. Recruits don’t pay to get jobs, employers do.

So do yourself a favour. Remember that we’re fighting a constant battle against crooks, scammers and schemers who are doing their best to separate you from our money. The best thing to do is be incredibly skeptical about anything concerning your money. That way you might actually win the battle.
Posted by Richard Harriman at 10:22

Rippln will require smartphones. They *want* to do something about smartphone apps, but it's probably just a disguised MLM.