Good day. I am currently listed at CRB for default in a loan payment at a certain bank. I don't have a problem with being listed. But it's the length of time I am concerned about.

I took the loan in 2007 and due to circumstances I wasn't able to pay. But in 2011 I found a job and resumed payments but I'm still blacklisted even now. Even though I've been paying the loan every month. What can I do?

I’m sorry to hear about your difficulty but I’m glad you’re doing your best to repay your debt. So many people get into difficulties and try all sorts of tricks to avoid repaying which only makes things much, much worse for them.

Credit reference bureaux like CRB don’t actually “blacklist” people, they just hold records of what happened to people and this allows potential lenders make a decision based on the history they see a customer has developed. A potential lender can consult the bureau and will see that you took a loan, perhaps you later defaulted but also that you later recovered and settled the debt. That will give them a good picture of how much risk you’ll present to them if they decide to lend you money.

In your case, where I think you’re still repaying the loan and the debt remains unsettled, then that's what the credit history will show and will form the basis of the decision they take. Given that you had a problem and haven’t completely resolved it yet, you’ll be seen as relatively high risk. I imagine this might change once you’ve settled the debt.

When you do finally settle the debt, ask the lender for something in writing stating that the debt was settled and make sure they update your credit record as soon as possible.

Can I make him fix my engine? 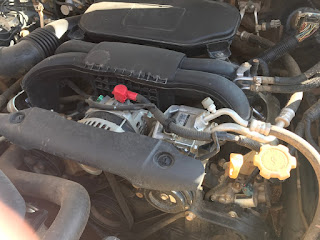 On the 5th January, I bought a second hand engine from a dealer in Mogoditshane for P7,300. On the slip I was given a one month guarantee.

The engine was fitted in the car and I used the car for about two months. On the 21st April, while travelling I head a funny noise from the engine. I stopped by the road site to check, I could not see anything. I started the engine and the noise was there again. I moved the car but it failed to move. I then called a mechanic who came and assessed the car and said it had broken the tension bolt which affected the car timing and all the 16 valves had been bent.

I then consulted the mechanic whom I went with when I bought the engine and told him what happened. He told me that he informed the supplier. I then bought the parts that I was told to buy and the mechanic fixed the car. We had a meeting for me to understand what could be the cause that lead to this and the mechanic told me that it’s a factory fault because a he has never seen a tension bolt breaking in 20 years.

I also enquired with another mechanic and he told me the same thing that I was told by the first mechanic. In the process of repairing the engine I spend P4,500 on spare parts and P1,500 on labour.

Your advise will be highly appreciated so that I know if I can take this matter forward or not.

Unfortunately, I suspect you’re in a very difficult position here. The engine was second-hand when you bought it and was clearly offered with only a 1-month guarantee. The seller will probably argue that they sold it in good faith and were very open about its likely state so I suspect there’s not much you can do unless you have evidence that they lied about the state of the engine.

The lesson here is to be very skeptical about any item that comes with a warranty as short as one month. The warranty period on any item is the period that the manufacturer or seller is confident it will last. Anyone who thinks something will likely last only a month is probably correct. Do you really want to take that risk?
Posted by Richard Harriman at 17:50