Hi guys. Two of my aunties have been swindled of hundred thousands. They saw this construction company its Zimbabwean owned in the advertiser and hired them to build them houses. This guy put up wall structures and then he disappeared after asking them to pay 3/4 of the total amount he charged. He’s nowhere to be found and relocated from the house he used to stay in, numbers changed, fired all his assistants. The houses are incomplete. Please assist, where do we go? Who do we talk to?

I’m very sorry but I suspect that your aunties are probably out of luck. It sounds like this guy has skipped the country and if that’s true it’ll be very difficult to get their money back.

However, if he’s still in Botswana, there’s a remote chance that the police can do something. At the very least it’s worth laying a charge against him at your local police station. I suggest you visit them and insist on laying a charge of “obtaining by false pretence” against him, contrary to Section 308 of the Penal Code. That way if he does ever reappear then that charge will be there to welcome him back.

The lesson is a hard one for your aunties but I think other readers who are considering building a house can learn from their misfortune. Firstly you should only ever use a builder that you have some reason to trust. That might be because they already built another house belonging to someone you know and who can comment on how professional they were. Ask about how reliable they were, did they keep up with the project plan and did they do a good job?

Then you need to agree a realistic project plan that attaches strict but reasonable deadlines to each stage of the project. There should obviously be a little flexibility in the plan because there might be delays beyond the control of the builder (like the weather) but it should be a plan that both parties can agree to. The plan must also detail when and how money should change hands. I don’t have a problem with a builder asking for some money up front but three quarters is way too much. However, after any up-front payment, every later payment should be made only when each stage has been completed to agreed standards.

I’m sorry that it’s probably too late already for your aunties but I hope others can learn something from their misfortune.

Is it a real parcel?

I received an email from DHL saying that a parcel had arrived for me but they could not deliver it because it had the wrong address. They said that I should print the receipt they sent me and take it to the nearest DHL office. I tried printing the receipt but it didn’t work. What should I do? 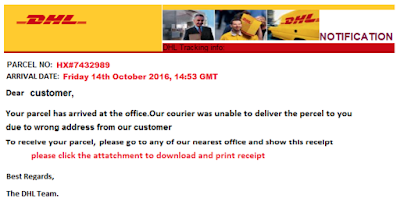 Delete the email immediately. Do NOT try to open the receipt that was attached to the email.

By coincidence I received exactly the same email a couple of days ago. It also said that there was an incorrectly addressed package waiting for me but it was obviously suspicious. Firstly, it wasn’t addressed to me by name. Instead it just started “Dear Customer”. If there really was a package for me don’t you think they’d know my name?

Attached to the email was a file named “DHL Receipt_pdf.7z”. Although you might think that’s a document in fact it’s a Trojan, a type of computer virus that will either do damage to your computer or will simply act as a channel for the package to spread itself further. Like a conventional virus it will either hurt you or the people you come into contact with. Or both.

The other clue was that although the email appeared to have come from a DHL email address, noreply@dhl.com, once I started digging I could see that the email had in fact come from a business in Madagascar. I suspect that someone in Madagascar received exactly the same email , clicked and opened the attachment and then their computer started spreading the virus onto other people like you and me.

This particular virus only affects people who run Windows but that doesn’t mean Mac users like me can be complacent. I might innocently forward an email like this to someone running Windows and harm them. Everyone, no matter what sort of computer you use needs to get use an up-to-date operating system with an antivirus package that they always keep completely updated. If you aren’t protected already please get protection today.
Posted by Richard Harriman at 09:18