How come I still owe them?

It was in 2010 when I approached a furniture store in Palapye to buy a bed and they helped me. My intention was to layby the bed and they told me it is not possible hence I took it on hire purchase. I started to pay them on installment for a period of 3 months consecutively then I moved to another company which took me out of Palapye where it was rare to find network coverage. Sometime on the long run it happened in coincidence that they called me when I was where they was the network coverage and they told me they going to take the bed since some months passed without paying them and gave them a go ahead to take the bed.
In 2013 when I checked on at the post office I found their mail that I owe them some money though they have taken the bed. So my question is how come I still owe them when they have took the bed from me?

I’m very sorry to tell you that you’re out of luck. 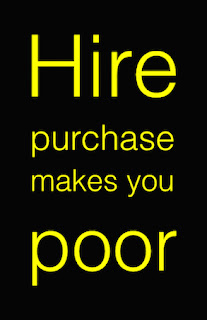 When you sign a hire purchase agreement and then stop paying and have your goods repossessed you’re screwed, you really are.

The agreement you signed with the store gave them the authority to repossess the items you bought as soon as you stopped paying your monthly instalments. It also allowed them to sell the item and then deduct the amount they got from the total amount you still owed. They probably only got a few hundred from that. Remember that a repossessed bed isn’t worth nearly as much as a new one.

You should also remember that the hire purchase price is typically twice as much as the cash price, perhaps four times the actual value of the bed. Its second-hand value is very low indeed.

Given that you only paid your instalments for three months and that the store got very little money when they sold the bed, I suspect you probably still owe about 75% of the total hire purchase price. You’ll also owe them penalty charges, interest and debt collection fees. That can easily add up to many times more than the cash price of the item. And the reason they can do this? Because it was all in the original agreement you signed in 2010.

I suggest you contact the store and see if you can arrange a repayment plan that you can afford. There’s no point in trying to escape this. Every day that you don’t pay will be a day when your debt gets bigger.

The lesson is simple. Hire purchase is a horrible way to buy things. Avoid it if you can!

Must I pay for the whole term?

I wish to seek advice about a problem I am having from my kid’s school. When coming from new year holiday my maid told me that she will be leaving work at end of month. We then tried securing someone to take over and failed, then we concluded the child be withdrawn from school to join her mother and attend school there. I am the father of the child and my work demands most of my time as I work in the mine. The fees for the term was P2,960 and when schools opened I paid P1,000 as part of the fee. The child was withdrawn end of month January to resume school with her mother. Mid February I received a copy of contract that was signed by my wife when the kid joined the school with a highlighted clause that reads: if the child is withdrawn from school for whatever reason before the expiry of the term, the parent is liable to pay all the school monies owed for the remaining period of the school term. I am not comfortable with this condition as it seems I will be paying for the months my daughter did not attend.

I’m sorry that I don’t have any good news for you. Your wife signed a contract with the school in good faith and both parties willingly agreed to every part of the contract. That included the clause you mention which says that if you withdraw your child mid-term you still have to pay for the rest of the term. This is a normal part of all private school contracts. The school offered your daughter a place they could have offered to someone else who would have stayed there all term. The school will suffer financially if you withdraw her and don’t pay for what you agreed.

I spoke to another private school head I know and he told me that in exceptional circumstances, such as when there’s been a bereavement or a genuine financial crisis, he might consider waiving the full term fees so it’s worth asking the school to reconsider. But you should prepare yourself for disappointment.
Posted by Richard Harriman at 00:05