Most of the complaints we receive at Consumer Watchdog are about irritations. Serious irritations, but just irritations nonetheless. Stores telling lies about warranties, cellphones that don’t last for more than a few hours and incorrectly labelled goods in stores are all really irritating but we need to keep a sense of proportion. They’re not going to kill anyone.

But there are things that might kill you. Right now, on the market in Botswana.

A reader sent me a link to a Facebook page of a spa that offered a range of normal spa-like services. Facials, massages and having your eyebrows fiddled with are all on offer but they also have some more intriguing products and services.

If you want to lose weight without the effort of eating less and exercising more they can perform some minor miracles with “electrotherapy” which they claim “is a safe and painless but powerful alternative to surgery and other invasive methods to losing weight, that can achieve rapid results.” They also say that the process “tones and firms abdominals, legs and arms, while breaking up fat.”

While it might be “safe and painless” it also seems to be entirely without evidence that it works. I certainly can’t find any scientific evidence that this type of “electrotherapy” works, just anecdotes from the people selling it. That’s hardly evidence, is it?

But it’s probably harmless, except to your bank balance.

What worries me more is a device they’re marketing that they call the “Quantum Resonance Magnetic Analyzer”. 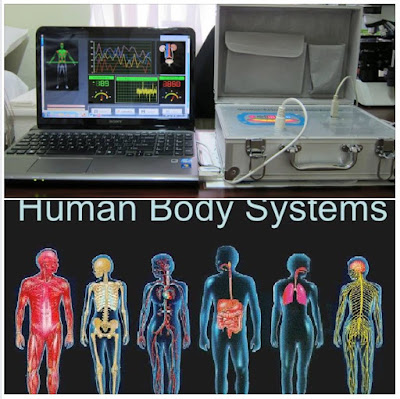 Here’s a free tip based on a lot of experience. When anyone without some education in physics uses the word “quantum” you know you’re about to be bombarded with nonsense.

This device, which is a briefcase attached to a laptop, can apparently perform miracles. They say that once you’re plugged into the device you’ll get “a complete body assessment” and that a “98 page report is generated reflecting various conditions of the body’s health systems producing 39 reports and 238 test results.” 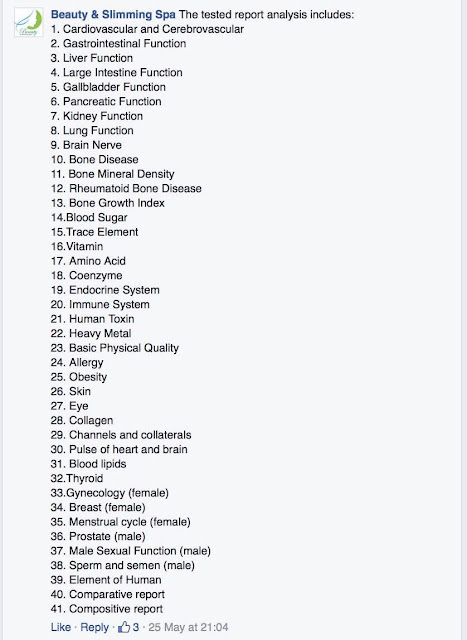 Clearly this device doesn’t do much for the quality of written English.

This machine isn’t new. Various people have been marketing them in Botswana for years using a range of different names, including “QXCI”, “EPFX”, “SCIO” and now this one. Whatever they’re called doesn’t matter, they are all basically the same thing. A lie.

In case you are wondering what all these initials mean, let me tell you. They’re abbreviations for “Quantum Xrroid Consciousness Interface”, “Electro Physiological Feedback Xrroid” and “Scientific Consciousness Interface Operation”. Anyone with even the slightest scientific understanding will tell you that these are just collections of long words assembled by someone who has no knowledge of physics. Someone doing their best to impress the gullible.

The truth is simple. There is no device that can detect this enormous range of disorders and diseases by simply attaching electrodes to your skin and there certainly isn’t any device that can detect any disorder when it is used by an amateur. And that’s what these people are. They’re not medically trained or qualified, they’re beauty specialists making bogus claims about a bogus machine they bought from a supplier of bogus equipment.

It’s the same story we hear over and over again. Elsewhere in the world these preposterous devices have been banned and their proponents prosecuted for making dangerous health claims. In fact the US Food and Drug Administration banned these bogus devices from importation into the USA several years ago. In an interview with the Seattle Times a spokesman for the FDA said, “This is pure, blatant fraud. The claims are baloney. These people prey in many cases on consumers who are desperate in seeking cures for very serious diseases.”

You might think that this is all fairly harmless. What’s the harm, you might ask? Given that these devices can do precisely nothing diagnostically or therapeutically, what damage can they do?

Almost all so-called “alternative health” products do precisely nothing so is there really any danger? Yes, of course there is. The danger is that someone with a real illness will go to one of these charlatans instead of going to a real doctor who can offer them a real treatment and a real chance of help. The danger is that someone with HIV, cancer, heart disease or any other serious medical disorder will go to one of these quacks with a magic machine instead of getting a treatment that will actually do them some good. If they’re lucky they’ll just not get any better. If they’re unlucky they’ll die.

Firstly, the placebo effect. Just the action of having some “treatment” can make you feel a bit better. The placebo effect can’t grow back an amputated leg or cure cancer but it can make pain a little bit more bearable or the symptoms of a disorder FEEL a little bit better. Getting plugged in to a useless device might make you feel a little better, even though the machine itself is doing precisely nothing.

But these charlatans also rely on one other fact. Dead people don’t complain. Because they can’t. Their victims, the people who are either so desperate or ignorant that they think these silly devices might work are the easiest for people selling false hope to exploit. They’re the people most likely to hand over large amounts of cash to get a miracle cure when they’re not thinking straight. Alternative medicine CAN be harmless but it can also be the worst form of abuse. Deadly abuse. Not just an irritation.
Posted by Richard Harriman at 22:24