MMM Global is a scam

We still haven’t learned our lesson about scams.

Despite our history of TVI Express, Success University, Karatbars, WorldVentures and, above all, Eurextrade, people in Botswana are still falling victim to pyramid and Ponzi schemes.

You’d think that after Eurxtrade in particular, when so many of our friends, family, colleagues and neighbours lost so much money, some of them even being ruined financially, that we would have been better able to resist the lies of the scammers who run these schemes. You’d think, wouldn’t you, that people would now know that the sort of claims made by the Eurextrade peddlers, of profits of “up to 2.9% daily”, are impossible. You’d think that people would know that investments typically grow slowly and steadily if you’re lucky and that enormous growth is a myth.

Just this week someone alerted me to a new scheme that is doing its best to steal our money. This one is called MMM Global. Their web site makes some very grand claims about how you can make money just by joining "a community of ordinary people, selflessly helping each other".

This is how they describe themselves:


"MMM is a mutual fund exchange network where people provide financial help directly to each other in automated Private Offices via the internet. You Provide Help to someone else (donate) then get rewarded with 30% every month on the amount you Provide Help with (donate). You then get an opportunity to Get Help (withdraw your funds) you have Provided Help. The Power of Giving lets you receive in 23 times more than you gave to others in a year!!!"

I’m not sure about you but that makes absolutely no sense to me. People offer each other money but somehow you get 30% interest and your money can be multiplied “23 times”? Does that make any sense to you?

I texted someone involved in the scheme asking them where the money came from and within moments I was brought into a WhatsApp group chat with over 100 other proponents of the scheme as well as victims. One of the advocates of the scheme explained it this way:


"Your Rands are converted to MAVRO when you request to Provide Help, so the growth rate is generated by the system on your MAVROS. MAVRO is a help index which grows by 30% per month, named by famous Sergey Mavrodi, founder of the MMM Community. 1 MAVRO = 1 Rand."

So this guy Mavrodi has invented a new currency that magically increases in value by 30% every month? I asked how and things got even more complicated. Nobody could explain where this 30% came from. I asked several times if it came from investments or simply came from the contributions made by new people joining the scheme but all I got was more gibberish. Then something curious happened. Various members of the group, who it later emerged were new recruits, said a few interesting things that I think showed the truth about this scheme. One said “When more people join it means more money in the pool.” Another said, trying to explain the source of the money, said that it came from “the money flowing in”.

That’s when the more senior members of the scheme became VERY angry, shutting down the comments from the newcomers but still not explaining where those 30% per month profits come from. Nor could they explain the suggestion that you get take out 23 times more than you put in.

Clearly this is a Ponzi scheme, no different to other schemes like Eurextrade. The money that some people receive is just coming from the money paid by later joiners. There are no profits at all, just money flowing from one victim to another and a crook running the whole operation somewhere.

And there certainly is a crook here. Remember what I was told about the “famous Sergey Mavrodi, founder of the MMM Community”? He is indeed famous. But not for inventing a new currency.

His page on Wikipedia describes him as “a Russian criminal and a former deputy of the State Duma. He is the founder of the МММ series of pyramid schemes. In 2007 Sergei Mavrodi was found guilty in a Russian court of defrauding 10,000 investors out of 110 million rubles ($4.3 million).”

Of course just because someone was previously convicted of running a scam and defrauding thousands of people of their life savings, that doesn’t mean he’s doing it now. Maybe he’s a reformed character. Maybe he’s now a good guy.

Yes, maybe but almost certainly not. Would you lend money to someone who stole from your distant cousins in the past? Would you take that risk? You’d be mad to do so.

The good news is that there has been some action in South Africa to put an end to the abuse MMM offers its victims. Capitec Bank have recently started freezing bank accounts they suspect are being used in the scam apparently with the cooperation of the South African National Consumer Commission and the Reserve Bank. Maybe the authorities should consider doing so here as well?

They certainly need to. The MMM South African “Changing the World Team” are currently advertising a function on the 20th February at Yarona Country Lodge in Mogoditshane where I’m sure they’ll be doing their best to persuade people of the riches that can be made by joining the scheme. 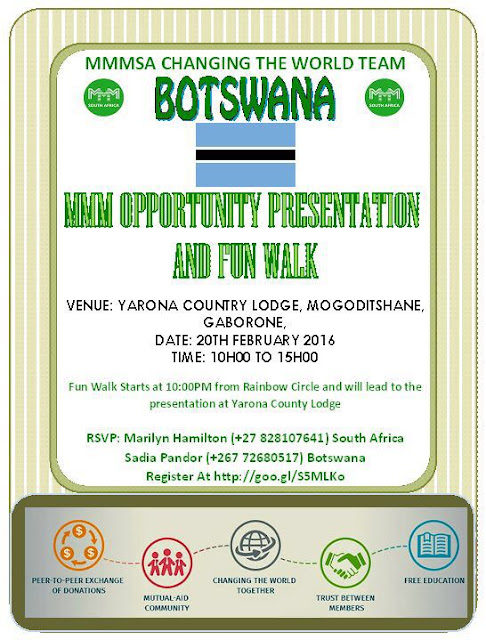 Do you think they’ll be mentioning the mysterious source of the promised profits or the criminal past of its founder?
Posted by Richard Harriman at 10:12