Scammers are still there

People sometimes ask me why I keep talking about scams. They tell me that these days everyone knows about scams, that nobody falls for them any more. So why am I wasting my time?

The truth is simple. Scams aren’t going away and people are still falling for them.

I know this and I have evidence for it. Firstly ask yourself this question. Why would a business still market products that nobody wants to buy? That would be a business that rapidly collapsed. The same goes for scams. Scammers wouldn’t still be offering their scams if people weren’t falling for them.

Secondly I have personal evidence that people are still falling for them. I’ve spoken to the victims.


“Help me out. There is this guy we had been talking since April. He stays in the UK. Recently he wanted to send me some goods which includes 2 phones, iPhone 6 and S4, a Canon camera, a laptop, clothes shoes and handbags, make ups, perfume, jewellery and cash. The goods were sent last Saturday and they were to arrive in South Africa on Tuesday. On Wednesday morning I received a call from a guy by the name of Peter Lucas from the Cape town airport saying the package has arrived in Cape Town Airport. So I need to pay $300 for tax clearance for the goods to be delivered. They are saying its a direct delivery. What scares me mostly is the money that he says he has put inside the package $5000.”

Most of us can tell immediately that this is a scam. It’s the same scenario that we’ve seen and heard many times before. We know that the facts are actually rather simple. There is no guy, no shipment, no laptop and iPhone, no jewelry and make-up and certainly no cash. The only genuine thing about this story is the money they want her to pay to get the mythical shipment of goodies. The $300 is what this is all about. Of course what happens is that when the victims pay the $300 they get nothing apart from further demands for more money until the victim either realizes that it’s a scam or she runs our of money.

With this particular victim there was bad news as well as some good.

The bad news was that she didn’t realize this was a scam until too late. She’d been so seduced by the scammer that the fell for his story. When I asked her if she’d paid them any money this is what she said:


“Yes I did sent them the $300 they needed but when I was expecting the package the same day I deposited the money. The guy said the package was scanned and cash was found inside so it had been charged with money laundering so he suggested to talk to one officer he knows who might help. He later called and said the officer needs a bribe of $300 again so he can pass goods. Thats when I began to be suspicious.” 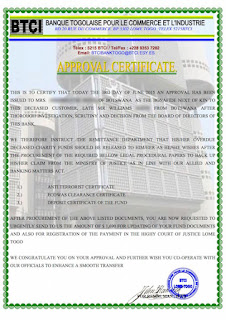 Luckily she only lost a round P3,000 and she quickly became suspicious and sought our advice. P3,000 is a lot of money but it’s not going to ruin her life. Others haven’t been so fortunate and have paid scammers money huge amounts before realizing the truth.


“Someone emailed me telling me that there is no one claiming some money as an Inheritance Payment from eight years ago. He said people who he contacted they do not believe him. He said he choice me because I have the same surname with the deceased person. So even me I was scared of Internet but later I filled a form he sent me to be a Beneficiary. But later I become confused concerning the huge amount they want me to pay for clearance. I even feel afraid to tell my husband what had happened to me because he will be angry of me as he sometimes warn me to be aware of internet things. I will be happy if you will help me to find out the truth soon, as I have already spent more than five thousands pula.”

So this time it was P5,000. Again not enough to ruin someone’s life but certainly enough to cause them real difficulties. So why do people fall for these scams? Isn’t it obvious from that very first email or message that it’s a scam?

Yes. But that’s the point. That first communication is MEANT to be obvious. It’s meant to be ridiculous. It’s how scammers make money.

A researcher from Microsoft, Cormac Herley, pointed out that scammers do their very best to weed out skeptics in that first email. By making the clues as obvious as possible, everyone who is even slightly skeptic will reject it immediately, leaving only the truly naïve and gullible potential victims to prey on. The scammer won’t waste any of his time trying to persuade skeptics to part with their money because they’ve already ruled themselves out, leaving the scammer to prey on the self-selected gullible ones.

As Herley said, the “initial email is effectively the attacker’s classifier: it determines who responds, and thus who the scammer attacks (i.e., enters into email conversation with). The goal of the email is not so much to attract viable users as to repel the non-viable ones, who greatly outnumber them.”

The lesson is again that skepticism is the only thing that will protect you from falling victim to a scam. That’s why those of us who ARE skeptics have a duty to spread the word to our less skeptical brothers and sisters.

That’s why I won’t stop talking about scams. Our family members, friends, neighbors and colleagues are still falling victim and it’s our job to help protect them.
Posted by Richard Harriman at 17:07