I bought a pair of beautiful and expensive trousers at a small independent boutique on Monday. I wore them on Wednesday and have now discovered that the seams on the inside of the thigh are already coming apart and there is a hole in the trousers. Having worn them, am I still within my rights to take them back???

I think it very much depends on what you were doing in the trousers!

If the damage is a result of the way you were treating the trousers then clearly it’s your responsibility to deal with the problem. However…

I’ll assume that you were wearing the trousers in a normal, responsible way and not mistreating them. In that case the situation is really very simple. Section 13 (1) (a) of the Consumer Protection Regulations says that goods must be “of merchantable quality” which means “fit for the purposes for which commodities of that kind are usually purchased”. Trousers should clothe your legs in a suitable manner and should last a reasonable length of time. Yours only lasted a couple of days which seems unreasonable to me.

I suggest that you go back to the boutique and show them what has happened to the trousers and ask them what they plan to do to remedy the situation. Let me know how they react?

My laptop was not booting and I took it for repairs. The technician who took my laptop gave me the run around from then on which resulted in my laptop being at his place of work for approximately two months. He later informed me that the motherboard needed replacing. He quoted an exorbitant amount for replacement and I felt it would be wasteful to replace the motherboard rather than get a new computer if indeed the motherboard was faulty.

I have tried to make him comprehend the gravity of this situation but he has shown no remorse for what he did and complete disregard for me as a customer. The hard drive has information that is absolutely irreplaceable. The computer can be replaced if indeed the motherboard is faulty but not the information I have lost through such carelessness. This guy has not showed any concern of locating the hard drive wherever he took it and instead keeps lying to me and does not bother to answer my calls or respond to them anymore. 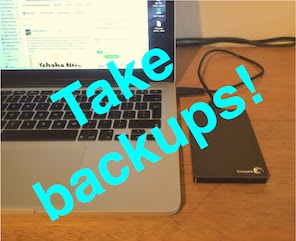 This is very suspicious. Section 15 (1) (a) of the Consumer Protection Regulations require a company to offer services “with reasonable care and skill”. More importantly, the first technician has stolen part of your computer and you have a right to get it back. We’ll get in touch with him to see what he says but if he doesn’t cooperate I think a trip to the Police is called for. That might inspire him to respond more properly.

Meanwhile, I hope you had a backup of your work? These days there’s no excuse for not having a backup of your work. External backup drives are very cheap and really should be an essential purchase when you buy a laptop. Also companies like Apple, Google and Microsoft all now offer free, online, cloud-based backup services where you can put backups of your key documents. If you haven’t set up some form of backup solution for your laptop then do it now. Right now.
Posted by Richard Harriman at 12:49