The Voice - another advance fee scam and Hotelia Travels

I keep receive mails like this one but I have never responded to them, can you trace how genuine they are?

The reader sent an email she had received from “Mr. Joseph Omar ” that was addressed to “Dear Email Owner/Fund Beneficiary” and was entitled “IRREVOCABLE PAYMENT ORDER”. 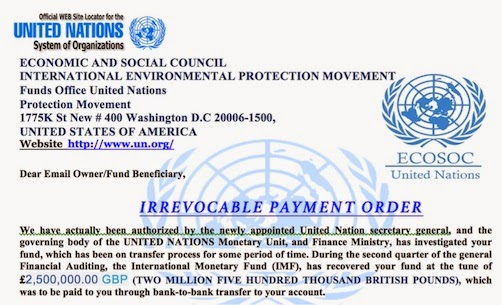 This email said that Joseph Omar had “been authorized by the newly appointed United Nation secretary general, and the governing body of the UNITED NATIONS Monetary Unit, and Finance Ministry” to make an “irrevocable payment guarantee has been issued by the World Bank Group and the International Monetary Fund (IMF)” for “£2,500,000.00 GBP (TWO MILLION FIVE HUNDRED THOUSAND BRITISH POUNDS)”.

If you’re a regular reader of The Voice I know you’ll be shouting “Scam!” as you read this. This is such an obvious one if you’re familiar with the scam industry. You’ll know as well as I do that this just isn’t true. Bodies like the United Nations don’t go around giving vast quantities of money to total strangers, certainly if they don’t even know their name. It doesn’t matter whether it’s the UN, Microsoft, Yahoo or Google, it’s just not believable.

Of course this is all about the “advance fee” that the scammers will soon demand from the victim. Just before this fictitious money is about to arrive the scammers will demand a fee from the victim. It might be an attorney’s fee, other times a bank charge, sometimes a customs duty, it doesn’t matter what, that’s what they’re after, that relatively small amount of money the victim has to pay to get their hands on the fortune they pretend to offer. The bad news is that if someone does pay it just opens the floodgates to more and more demands which only stop when the victim either runs out money or finally sees the truth.

If you ever receive an email like this you have only one sensible choice. Delete it instantly.

I was a member of Hotel Express and was serviced by one of their consultant called Nomsa. Upon renewal of the Hotel Express membership, I called Nomsa so as she can assist me with the membership and she did came back to confirm that the membership was renewed. A debit of P1,548 was taken from my account followed by another subsequent debit of P584 in July and August 2014 respectively. What amazed me was that the debit reflected the name Hotelia Travel. Having done my investigations and learning that Nomsa had left her employment with Hotel Express to joined a company call Hotelia Travels, I accepted terms as are and requested that she send me my membership of Hotelia Travel.

I called Hotelia Travel and requested Nomsa to send me any proof that I am a member of theirs but got no assistance and also that the receptionist would not let me get hold of any person on managerial level.

This isn’t the first time I’ve heard of Hotelia Travels. Even Hotel Express International have warned us about them, telling us the same story you’ve told. There are also numerous complaints about them online.

What was done to you was hugely deceptive. Nomsa lied to you and both she and her employers owe you an explanation, an apology and a refund.

I’ve tried calling and emailing Hotelia Travels myself but I haven’t been any luckier than you in getting a reply. I won’t stop trying.

I still don’t understand why people even think of paying to join holiday discount schemes when you can frequently get discounts entirely for free or get a good deal simply by shopping around. Many chains of hotels offer a variety of discount mechanisms and they don’t require you to do anything other then join their mailing list or visit their web site. One chain even allows you the chance to bid what you want to pay if you stay in their hotels at the weekend. All for free. Why would you need to buy a membership when you can get significant discounts for free?
Posted by Richard Harriman at 16:37