A statement from Stanbic Bank Botswana 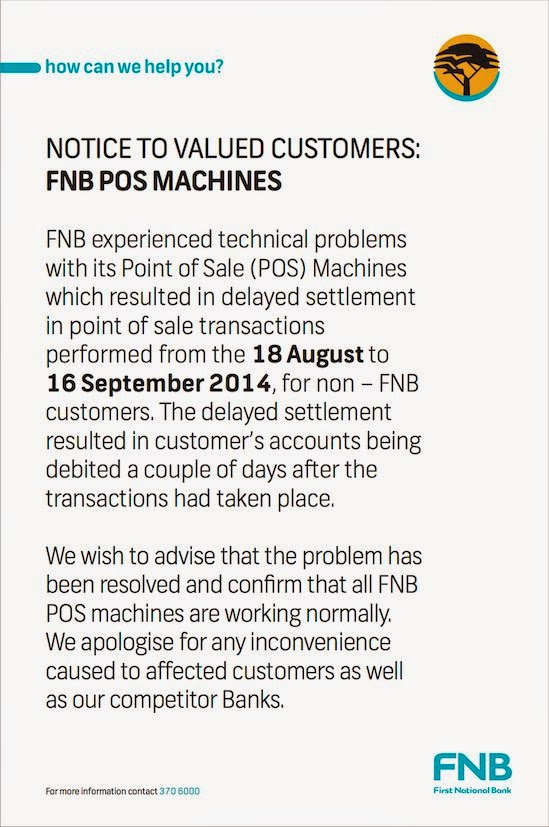 You'll remember that FNB had problems with their Point Of Sales (POS) devices. Many people found that large amounts of money had been withdrawn from their bank accounts, some being left with very little money and some with none at all. A few have found themselves suddenly overdrawn with what seems no good reason. Some customers have then been charged penalties for going over their limits.

It's important to note that (as far as we can tell) nobody has had too much money deducted from their account. Every deduction relates to a real purchase that customers made. However they've only been deducted from customers' accounts weeks after the original purchases were made.

We alerted people on 17th September when we first heard reports about it. On 18th September FNB published a notice regarding the situation and Barclays responded to their customers very soon afterwards.

We assumed that the problem was then sorted out but it turns out that it's still on-going. Stanbic Bank Botswana have today officially told us that their customers are also being affected. They say:


"We would like to confirm that indeed some of our customers are affected by the FNB POS machine technical problems that occurred on August 18- September 16 as per the FNB notice published in the newspapers.

We advise Stanbic Bank customers who have are impacted or suspect that they may be impacted to visit our branches as soon as possible in order to establish if at all their transactions relate to the issue at hand. The issue is a delayed settlement of transactions conducted on FNB POS machines between mid-August and mid-September as stated above, and this can result in overdrawn customer accounts. Depending on the extent of the impact and the client’s ability to repay the amount due, we will then have a conversation on how the client can be assisted through an overdraft and or a term loan.

We apologise for any inconvenience that this may have caused."

The lesson is simple. You need to keep all your receipts when you make purchases using a POS device in a store. Then check your bank account to make sure that the money you've spent has actually been taken from your account. If it hasn't then you need to call your bank and not spend it!