Yes, they really do.

To begin with we have the power to choose. We have the power to take our money to a different store if the first one disappoints us. If the first store treats us badly or just has prices we can’t afford we can go to another store that treats us better. That thought is one of the few things that keeps store owners awake at night. They’re terrified that customers will just take their money elsewhere.

Consumers also have the power to complain. They can complain to the Consumer Protection Unit, their local council, the Bureau of Standards, the Competition Authority, NBFIRA, BOCRA, BQA, the Ombudsman and endless other bodies that have the power to intervene if there’s evidence that the rules have been broken. With increasing frequency these bodies are doing exactly that. They intercept things at the border, seize dangerous products on sale in stores, warn the public about dangerous goods and even shut businesses down if they don’t mend their ways. All because consumers exercised their power to complain to them.

Then there’s consumers’ power to make things change. For several years we’ve been hearing complaints from consumers about the prices some South African chains charge in their stores in Botswana compared to their prices in South Africa. They’ve been complaining about Woolworths in particular.

It didn’t take long to confirm this. Woolworths in Botswana would simply import products from South Africa with a label showing the price in Rand and then put another label on top with a new price in Pula. All it took was to peel off the Pula label and compare it with the Rand price to establish that the prices were being significantly marked up. For example one item we found was marked for sake in SA for R28.99 but was labeled here for P31.80. When you first look at those numbers it doesn’t seem like a big difference but then you do the maths. If you take off the South African VAT of 14%, convert the core price from Rand to Pula using the current exchange rate and then add our VAT rate of 12% you find that the item should really have cost about P25. That’s a mark-up of over 25%. Other products had a mark-up of closer to 40%. 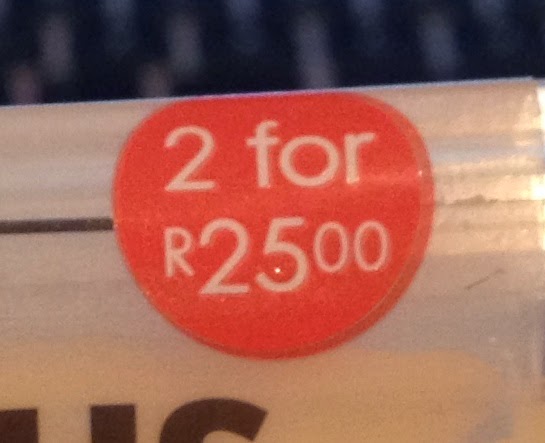 We found one item that was marked as being on a 2-for-1 sale in South African but when we bought two here in Botswana we were charged for them separately. When you did the maths for that purchase, including the differing rates of VAT, the current exchange rate and the absence of the special offer in Botswana the markup was 73%.

There is no possible reason for this sort of mark-up. None whatsoever. In the past we’ve heard that it costs them to cross the border from SA to Botswana, that the added distance increases their costs or that the cost to sell in Botswana is higher. But there’s an obvious question. If these excuses are correct, why don’t other stores mark things up to the same extent?

I spoke to the Managing Director of another South African chain of supermarkets and he explained how they converted the pricing for Botswana. He told me that on the first of every month they get the exchange rate from their bank and stick to it for the entire month and they add precisely nothing as a mark-up. Not one thebe.

We contacted Woolworths in South Africa and asked if they could justify the mark-ups. We knew already that they were changing the way they operated in Botswana, removing the local company that operated on their behalf and taking over direct management themselves, and we wondered whether this would have an influence on pricing?

They promised to take a look and get back to us. Last week we heard from their Corporate Press Office in South Africa. This is was they said:


“Woolworths has announced that it will reduce the price of both food and clothing in Botswana after taking over the management of its stores from the previous franchisee.

Following the acquisition of the business, Woolworths initiated a comprehensive review, look (sic) at every aspect of our business, including the operational efficiencies and its pricing model. The objective of the review was to ensure that customers enjoy the same brand experience in Botswana as in South Africa.”

Paula Disberry, the Group Director of Retail Operations at Woolworths went on to explain that:


“We have listened to our customers and reviewed the pricing model in Botswana. By improving supply chain efficiencies and changing our business model from franchise to corporate stores, we have secured savings which we will pass on to our customers. The savings will be in the form of reduced food and clothing prices from mid June 2014.”
Result. At least in part to pressure from consumers Woolworths is reducing its prices to enable its customers to “enjoy the same brand experience in Botswana as in South Africa”.

We need to make sure it really happens and that it happens to the right degree. We don’t just want a tiny reduction, we want prices that are comparable to those our South African cousins are expected to pay.

So here’s what we all should do. Let’s go to Woolworths and buy something standard like a loaf of bread or a liter of milk. Then do the same again next month. If the prices have gone down suitably then we can be happy. If not, then are we prepared to show a bit of muscle?
Posted by Richard Harriman at 17:08