You don’t have to be stupid for fall for a scam. Despite what a lot of people think it’s perfectly possible for smart, educated and clearly intelligent people to fall for a lying, cheating scammer. Part of the reason is economic. Scammers have no interest in stealing money from people who aren’t successful and who don’t have any money. They deliberately target people with sufficient good luck and skill to have some cash in the bank, otherwise they’re wasting their time.

We received an email last week from a consumer who was just about to start a new business. He came to us for advice before he finally committed himself. This is what he said.


“I have been in negotiations for a few months with a certain individual called Malcom K. Claxton (a private investor based in the UK) who says he is willing to finance a project that I want to start here in Botswana with up to one million US dollars as a loan. I came across him while doing some research on the internet. Recently he told me that I must employ a UK based attorney to handle the legal part of the transaction for me according to UK laws.

However I did not find an attorney and he came up with an individual called [name removed] from [company name removed]. We are now at a stage where they say the funds are ready to be wired to my bank account here in Botswana and before the wire transfer they want me to pay US$ 5,000 legal fees. This is where I want you to help me check the authenticity of these two individuals before I pay these legal fees.”

All my instincts told me that this was a scam and it didn’t take much time to confirm this. The clues were there.

Firstly, the only trace I can find anywhere of this “Malcolm K Claxton” is a handful of postings on web sites announcing that he is a private individual who invests up to $20 million with people around the globe. He claims to operate a company called "MKC Investment Funding" based at an address in Sheffield in the UK. However, and this is where the story begins to unravel, there is no such company registered in the UK. I know, I checked. Also, no such company is registered with the UK’s Financial Services Authority. I know, I checked. 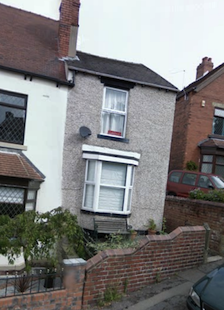 What’s also interesting is that he gave his potential victim an address in the Sheffield that also doesn’t seem correct. In fact the address is a very small, rather humble house that I can’t believe is the nerve centre of a multi-million dollar investment enterprise. It’s the house in the middle of the picture. In fact this house is just an address picked at random. It was quite easy to find out that the person who really lives there is someone completely different and genuine.

Of course the commonest clues were present as well. A free email address and nothing more than a cellphone number. Real investment companies have a bit more than this I think.

The business with the UK attorney he wants our reader to engage is more complicated. The name he gave is that of a genuine UK lawyer. Also, the name of the law firm is genuine as well. However, that lawyer doesn’t work for that firm. That’s why I took the names of the lawyer and the firm out of the email above. They’re both genuine, both innocent and neither has anything to do with this scam.

That’s what it is of course. It’s a scam, an advance fee scam. What the scammer is after is that $5,000 legal fee. You can bet that as soon as that’s been sent there will be more and more demands for extra money until the then poor victim has run out of money to have stolen. However this is a scam with a slight difference. I’m sure we’re all used to scammers emailing us with unbelievable offers of cash, but this one works the other way round. You approach him.

But it doesn’t change a thing of course, it’s still a criminal scam.

The biggest clue is a bit more fundamental though. I’m no expert on international finance but I don’t believe this is how real investment companies work. Most importantly real investors will be slightly old-fashioned and will almost certainly require a face-to-face meeting with you. And lengthy investigations, audits of your financial statements and lots of references from your customers, bank manager and everyone else who knows you. Investment companies do not operate entirely by email.

Be warned and be skeptical!

There’s an email going around claiming to be from DHL that announces:


“The courier service was not able to deliver your parcel at your address. Cause: Mistake in address”

It asks you to open an attachment to the email that it implies is a label that will help you pick up your package. Please, under no circumstances open this attachment. The attachment in this case was a virus program that could have caused untold damage to your computer. Most probably it would have enabled your computer to be hijacked and used to further distribute viruses and spam email. Please be careful with unknown, unexpected attachments to emails.

Most importantly get up-to-date anti-virus software for your computer. It doesn’t have to cost any money at all. I’ve put link on our blog to two of the most popular anti-virus packages, both of which are entirely free.

Posted by Richard Harriman at 22:12