An email came in from a consumer asking our opinion on a workshop to be held in Phakalane next month entitled “Relax And Repair With EFT” or “Emotional Freedom Techniques”.

This utter nonsense was made up by someone called Gary Craig. His profile says:


“Gary Craig is neither a psychologist nor a licensed therapist. He is an ordained minister through the Universal Church of God in Southern California, which is non-denominational and embraces all religions. He is a dedicated student of A Course in Miracles, and approaches his work with a decidedly spiritual perspective. However, there is no specific spiritual teaching connected to EFT or its Practitioners.”

In other words he’s not a scientist and it’s not scientific, he’s spiritual because he’s been ordained by a silly made-up church in the home state of silliness, but his ridiculous EFT isn’t spiritual. 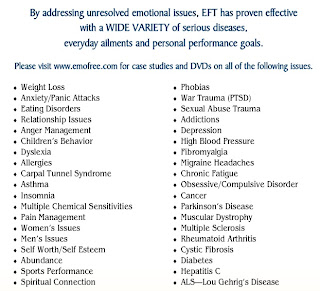 In fact EFT is based on what they very scientifically call “tapping”. The EFT people say that:


“although based on acupuncture, EFT has simplified the realignment process by gently tapping on key meridian points on the head, torso and hands.”

So they just tap you? On your non-existent “meridian points”? So it’s like acupuncture, which all the evidence suggests is pseudo-mystical, pseudo-scientific claptrap, but without the one thing that might plausibly do anything?