Will he fix my TV again?

I requested for a TV repairs service from a gentleman who advertises on Facebook.

On 27th March he came to my house and fixed the TV around 1 pm and I made P600 payment for the service. Same day in the evening around 6 pm the TV went black and back to the state it was before it was fixed. Basically it only worked for less than 6 hours. I remember clearly asking after it was fixed how long I expected it to operate before I experienced the same problem and he said I shouldn't be worried by having the problem anytime soon.

I called the gentleman the same day it shut down after he did the repairs and he agreed that he will come the following day to come and attend to it. Ever since that day we have been going back and forth him telling me how busy he is all of a sudden and never comes through whenever we make appointments. I even suggested to go to his home so that he can attend it there and he agreed to meet only for him to not respond to my calls and texts when I arrived at the agreed place.. He is now ignoring my calls and texts and I have tried to plead with him to bring back my money since he failed to fix the TV as per the agreement and he said he does not have money to pay me. Please help me on how I could be assisted in getting back my hard earned cash from this gentleman as I feel robbed.

Section 14 (1) (b) of the Consumer Protection Act says that when a supplier:

"undertakes to perform any services for or on behalf of a consumer, the consumer has a right to … performance of the services in a manner and quality that consumers are reasonably entitled to expect".

Surely it's quite simple? If you pay someone to fix your TV, then your TV should work.

The Act goes on to say that if a supplier fails to perform a service adequately, they must either:

"remedy any defect in the quality of the services"

"refund the consumer a reasonable portion of the price paid for the services performed and goods supplied, having regard to the extent of the failure".

I contacted the TV repair guy and he told me he has transport problems but he promises that he'll come and fix your TV. Let's hope it works this time. 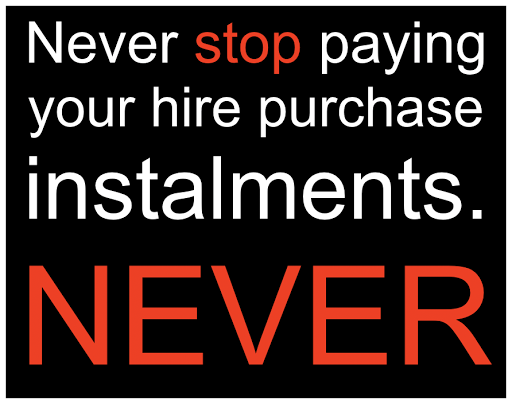 I need your assistance. I bought goods on hire purchase in 2019. At the end of the first lockdown I went to them and told them I can't afford to pay them. They said I should keep on trying to find the instalment money but I failed to find it. I went to them the second time they said when they take the goods because of failure to pay, I will continue paying even after they take them. I am asking is how fair is this. Is there truth in it?

Regular readers of The Voice will know already what I'm going to say because we've covered this many times before. Unfortunately, what you've been told is 100% correct.

If you fail to keep up the payments on a hire purchase agreement the store is entitled to repossess the item you bought. They will then sell it and deduct the money they get from the balance you owe them. However, it's important to remember that the repossessed item is now second-hand, perhaps not in the best condition and they'll sell it to the first person who offers them some money. The amount they get will almost certainly be only a fraction of what you still owe. When you add penalties, interest and debt collection and legal costs you can easily end up owing MORE than you did before the repossession.

What's worse is that you'll then owe money for something you don't even possess any longer. I suggest that you contact the store again and try to negotiate a repayment plan that you can afford.

The lesson is simple. Please do your best to avoid buying things on any form of credit if you can buy it for cash.
Posted by Richard Harriman at 16:21