1. Can the bank move my money around?

"I have accounts with my bank for a long time and was credited with various debit and credit cards. All has been smooth for all the years until I failed for the first time to pay my loan monthly instalment and, within a week, they transferred all the balances into my loan account without prior communication. Please assist."

Yes, because you told them they could. You might not remember doing so, in fact you might not ever have done this knowingly but hidden deep in your loan agreement was a clause saying they could do exactly this.

However, it would have been polite for them to have called or emailed you in advance, don't you think?

2. Should they repair the TV?

"I lay-byed the television just two months ago and I took it home for use. A week after the purchase my TV slightly hit a wall when it went dark. Two days later I went back to the store to inform them about the damaged product, they did not help me and so I decided to look for help were I could find it better, Consumer Watchdog. I bought this television very expensively and it's really sad and heart breaking to lose such much money on a product I never really used and enjoyed."

The warranty that comes with items like this only covers you against manufacturing or design faults, not accidental damage while the item is in your custody.

Ask yourself this. Who caused the damage? Did the store? No. Did the manufacturer? No. Did the customer? It looks like it.

IF this consumer had taken out a household insurance policy they might have been covered. Yes, insurance can seem expensive, but it's often not as expensive as not having insurance.

3. Will they really delete my email?

In comes an email that many other people have received.

“Dear watchdog, Our record indicates that you recently made a request to shutdown your e-mail and this request will be processed shortly. If this request was made accidentally and you have no knowledge of it, you are advised to cancel the request now. However, if you do not cancel this request your account will be shutdown shortly and all your email data will be lost permanently.” 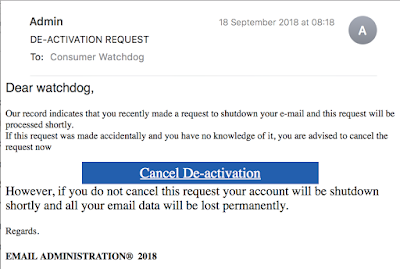 Seems worrying. I can imagine how someone would be tempted to click on the link to prevent their email being "lost permanently". However...

If you hold you mouse pointer over the "Cancel De-activation" link, you see this, where the link will really take you:

Why would our email provider, who are based in Botswana, link to a domain in Poland (".pl")? Note also that the link includes the email address that was targeted. Clicking on this link will confirm to the scammers behind this that this is a valid email address, just making future attacks more likely.

I removed the email address from the link and went there. Be careful if you ever do this yourself. The web site (which has now been removed) provided a form that asked for my email address and password. Imagine what scammers could do if they had access to all your email? What could they discover about you? What passwords, bank account details and guilty secrets are stored in your online email account?

4. Longrich – is it a pyramid scheme?


“we have supplements, skin care, toiletries ,weight loss products. Buy a once off stock of R1000/ R1500/R2000/ R2500. you get pvs which are point that you accumulate and move ranks within the business. Recruit 3 members and teach them to do the same. you will register them under u. you also get pvs when your downlines join under you.”

They also claim to offer incentives to their recruits including: 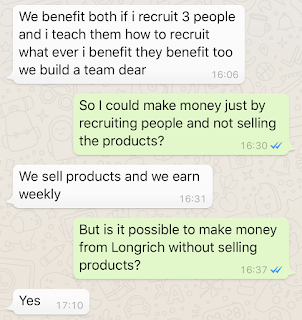 I then asked a simple question:


“is it possible to make money from Longrich without selling products?”

Their answer was very simple:

Section 9 of the brand new, 2018 Consumer Protection Act says that:

A pyramid scheme is defined in the Act as a scheme

So, is Longrich a pyramid scheme? At least one of its recruiters says so.

And it gets worse.

One of the people recruiting for Longrich posted a picture of various products she claimed to have purchased. 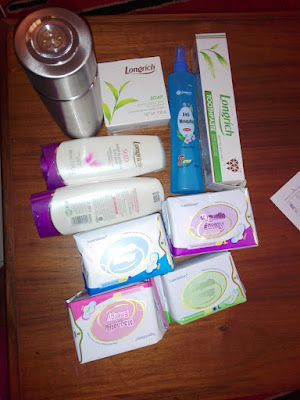 Included in this selection were Longrich's miracle sanitary pads, that appear to offer "Magnetic Energy", "Anion" and "Far infra-red"? 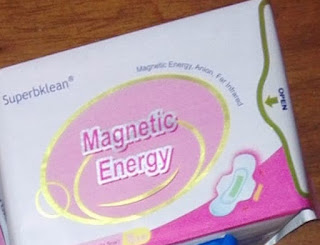 When various members of the Facebook group questioned her about these claims, she responded by claiming that:

So she suggests that Longrich make no claims about "magnetic energy" relating to their sanitary pads? Really?

Take a look at the Longrich BioScience web site relating specifically to these pads. It claims that"

It goes on to claim that:

This is all pseudoscientific nonsense. Worse still, it's dangerous.

A member of the Facebook group contacted us privately saying that a relative had paid P2,500 to join Longrich earlier in the year and:


“up to now if you ask the results she gets upset apparently she needed three people under her to start earning which she had found but still those need 3 more people under each of them.”

She and others have explained how upsetting, humiliating and disruptive schemes like Longrich can be. They actively encourage recruits to recruit from among their circle fo friends, family members and workmates and this only has one effect, to ruin those relationships.

Longrich is, if you believe their own recruiters and the Laws of Botswana, a pyramid scheme that sells dangerous, illegal products and that ruins relationships.

I think the time has come, as have the right laws, to show these schemes the way to go home.
Posted by Richard Harriman at 10:01