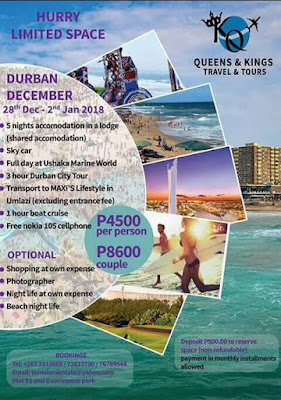 He promised in writing to pay the money by Friday afternoon but come Friday he has been sending me from pillar to post. He has not been taking my calls only texting me that he is still looking for the money. I have given him more than enough time. I am very disappointed. We ended up funding our trip from our savings because we really wanted to go to Durban. All I want is my refund.

Finally he sent me P4,000 after I sent his employees the letter that I am sending to Tourism. I would really appreciate it if u could help.

You’re ahead of me already! My first suggestion was going to be that you contact the Botswana Tourism Organisation and get their advice and perhaps to register a complaint with them about the company in question but you appear to have done that already.

We also spoke to the manager at the company last week and he assured us that you would get the remainder of your refund before Wednesday last week. However, as we both know, that didn’t happen. He’s let you down badly and he’s done the same to us. I think the time has come to stop trusting him and to get serious.

I suggest that you write him a letter saying that he has breached the terms of your agreement and broken the promise he made in the letter he wrote to you promising to refund you. Tell him that you will take legal action against the company if he doesn’t pay you within 24 hours. Then, if he doesn’t, go to the Small Claims Court and get an order against him for the amount he still owes you. And then write another letter to BTO!

Update: We contacted Queens and Kings Travel and Tours and gave them several opportunities to respond and despite them saying that they would give us some feedback they failed to do so. I think that tells you something about their approach to customer care, don’t you?

I need advice. I purchased building material from a major store on Monday with a promise for delivery in 2 to 3 working days. I have called several times to request they deliver and every day is a promise of tomorrow. I requested to speak to the deliveries managers to no avail, same story with the general manager. I have engaged workers who are now getting restless and frankly I am very worried about this. Would I be within my rights to go to the store and request they refund the money spent since it appears they have no intention of making delivery. Thank you.

Yes, I think most certainly you WOULD be entitled to cancel the deal and demand a refund. You bought the items with a promise from the store that they would deliver in a certain timescale and they’ve let you down and cost you money employing workers who are idle.

I suggest that you write them a formal letter cancelling the deal and explaining that they have failed to honour their side of the contract you both entered. Make sure you hand the letter to the General Manager him or herself and don’t take No for an answer. Insist that the deal is cancelled. In the letter you should also give them a deadline for refunding you. Remind them in the letter that Section 15 (1) (e) of the Consumer Protection Regulations requires a supplier, when a deal is cancelled, to return any deposits or payments “promptly”.

If you like we can also contact the store to help explain to them what they need to do!
Posted by Richard Harriman at 14:08