Are we all pirates?

I caused some disturbance in our Facebook group last week when I posted the details of a conversation I had with someone who posted an advertisement in the group. His advertisement offered a range of technology services including “Laptop repair(any problem)”, “Theory Test Software(for Laptop/Desktop & phones” and “*asswords removal both pc & phone” but the one that interested me most concerned Windows. 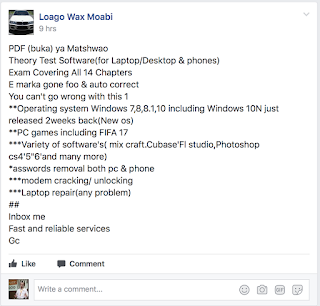 The ad offered “Operating system Windows 7,8,8.1,10”. I messaged the guy and asked him how much Windows 10 would cost me. “p100”, he told me. Given that Windows 10 currently costs about ten times that much if you buy it directly from Microsoft, I’m sure you can understand that I was suspicious. “Is this legal”, I asked? “What's legal??upgrading your machine??that's ur laptop u do whatever u want...”, was his response. I asked if this wasn’t software piracy and he said “No sir if you know IT that's not a piracy”. My final question was “Are you paying Microsoft their licence fee?” and that when he lost patience.

“Old man get your facts together then talk to me when ready I got no time to argue with u let me help those who want my service”. 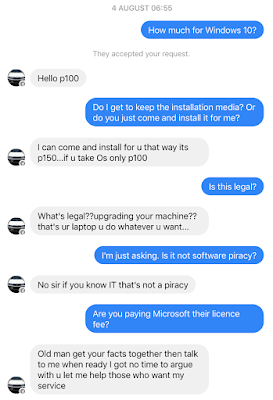 I posted this exchange as well as a copy of his original advertisement so everyone in the group could see it and the reaction was mixed. The overwhelming majority expressed surprise or shock at what was clearly software piracy but a vocal minority had different reactions. One member of the group said “Leave the guy alone, why are you trying to disturb his hustle”. Another asked “How are you ripped off when he sells a software worth more the P1500 to you for P100?” Someone else suggested that “That's how the world works, until then, let the guy be, hes trying to make cash akere”.

I should state that I admire small entrepreneurs, those people who try to make some money the hard way, by hitting the streets (or Facebook) buying and selling things, trying to make a profit. But I don’t admire hustlers. My dictionary defines the word hustle as “to obtain illicitly or by forceful action” and that’s an approach we shouldn’t accept. I also don’t admire thieves.

And yes, I do think this guy is a thief. The simple truth is that the only way he can afford to sell people copies of Windows 10 for on tenth of its normal price is if he is selling pirated copies of the product. And selling pirated copies of anything is a form of theft. The fact that it’s common is no excuse. Many people exceed the speed limit when they’re driving and drive through red lights but does that make it right? Does the frequency of a crime excuse that crime? No, it doesn’t. It also doesn’t matter that someone else might have done the same thing. That doesn’t excuse you doing it.

The fact that the person or company having its products stolen is fabulously wealthy is also irrelevant. Software pirates aren’t modern-day Robin Hood figures robbing from the rich to give to the poor, they’re keeping the money for themselves.

It’s also important to know that they’re selling you a product that probably won’t work properly. Companies life Microsoft are smart enough to build protections into their technology to ensure that piracy is difficult for its consumers. Sooner or later the computer running the pirated version will connect to the internet and then will declare itself to Microsoft’s servers and will then start the process of shutting itself down. One member of the group appears to have that problem, posting “My software is not genuine. My laptop keeps on popping that message whenever am using it”. Eventually the software is going to stop working completely.

Not everyone was sympathetic to our pirate. One member of the groups suggested that if “you are comfortable buying pirated software, then you might not mind buying a stolen cellphone or tv.” Another described his customers as “being ripped off by unscrupulous crooks masquerading as businessmen”. Yet another correctly suggested that his services should be avoided because “he's breaking a handful of laws in doing so and making the recipient a criminal as well.”


"Any person who receives or retains any property knowing or having reason to believe the same to have been unlawfully taken, obtained, converted or disposed of in a manner which constitutes any other offence, is guilty of an offence and is liable to the same punishment as the offender by whom the property was unlawfully obtained, converted or disposed of."

Meanwhile I also acknowledge that Windows 10 is an expensive product. It comes already installed on almost all personal computers but if you need to buy it new, you’ll need to pay about P1,200 online and more if you go to a computer store. If you add the price of Microsoft Office on top that’s roughly the same price again so it really can be an expensive business.

The alternative is to be radical. Go for an entirely legal, safe and free alternative to Windows. Yes, I did say “free”. Install a version of Unix such as Ubuntu or Linux which you can download for free and it even comes with the equivalent of Word, Excel and Powerpoint and is really easy to use. Better still it even runs on the older, lower power computer you might have. I’ve done it several times and I have computers at home and in the office running Linux right now. Even better still, like its distant cousin, the Mac, a computer running Unix is almost immune from viruses and malware? 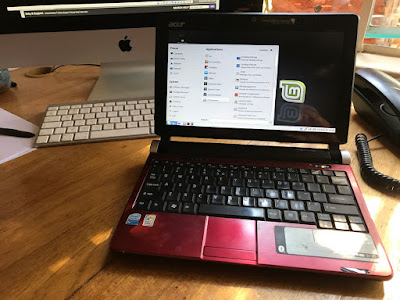 If money is short (or even if it’s not) the alternative is there. You don’t need to spend your precious, hard-earned money with Microsoft or even a hustler selling you stolen goods.
Posted by Richard Harriman at 17:21