I bought a Samsung phone from a store in 2012, which worked for two months. I took it back and after a year of following them up I wrote to you for assistance and after you intervened on my behalf, they called me to say I must collect the phone which I did, very happy that at long last I got my phone back. My happiness was short lived, the phone worked for less than an hour.

I took it back the minute I realized that it was still not working and from last year till today I still don't have my phone. From time to time I would go to the store to check but they always promise they will follow it up and get back to me, which they never did.

During all this I stopped paying my account because I felt that I was being cheated. I even wrote informing them about this problem and also that I will not pay till I get my phone, and I also said that I feel that it's only fair that they should cut off the interest they are charging me as it is their fault that I don't have my phone.

I think I was owing around P1,000 but I received a call yesterday from some guy telling me that they sent my name to ITC and I'm owing P5,000+, so I must come and pay. I told the ITC guy that I will not pay jet till they give me back or replace my phone. He said he didn't know how to handle that, so I must talk to the store.

May you please assist me? 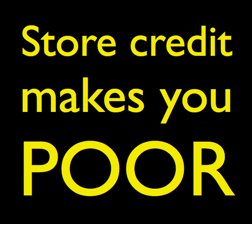 I’m sorry that this has dragged on for so long. You deserve a lot better than this.

The issue of you not paying is a problem. Store hire purchase agreements are very one-sided. Even if the store fails completely to do the right thing you are still committed to paying the installments.

However, considering their complete failure to offer you a decent service I expect them to fix the problem for you. I’ll get in touch with the store’s Head Office in South Africa and see if they’ll do the decent thing and fix this appalling situation for you.

I bought a wardrobe set from a store in Kanye in 2009. I made a few installments and then had financial challenges and started missing my payments. I wasn't a regular payer but tried to service the account. My account was always in arrears and I struggled to bring it back to normal until one day in 2012 the shop called me to settle the account with P840. By then the interest had accumulated to P5300! Very shocking and irresponsible on my part!

I reacted fast when I was given this offer and came as soon as I could and paid the P840 and my account was declared settled! This was in 2012.

Last week I get a call from the store demanding that I come settle my interest charges of P5300!! I was shocked and demanded an explanation to this. I was informed that the shop made a mistake by allowing me to "settle" the account and they are making losses as interest owed should have been paid instead of being "settled".

I need you to advise on this matter. Should I pay them as they are threatening to take the account to debt collectors? Please advise on this?

Firstly I admire you for not trying to avoid your obligations. The store clearly made a mistake when they allowed you to “settle” your debt but that’s not your fault.

I contacted the store’s Head Office and they’ve agreed that it’s been entirely settled. You don’t owe them a single thebe any more.
Posted by Richard Harriman at 13:53