Yet another "romantic" advance fee scam. The victim met a guy on a dating web site and over the next three weeks he flirts and "seduces" her and she develops real feelings for him.  He calls himself "Smith Dent" and claims to be a British engineer working for a mining company and sends over some pictures of himself. (The pictures have, of course, been lifted from the web. The guy pictured is an innocent person presumably with no knowledge that his pictures have been stolen.)

As a gesture of his affection and love he then claims to have sent the victim a package containing a gold necklace, a watch, an iPhone and £7,500 in cash. 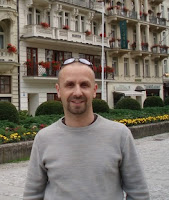 Then she gets an email from "Mrs Helen Esenado" from "Sky Delivery Services" in Malaysia which says (my emphasis):


I am pleased to inform you that your package is in possession of the Authority awaiting clearance due to the money detected in your package when your parcels is going through scanning there we detected that some currency is there.

That, of course is what the whole thing is about, the $650 the fake shipping company require.  The shopping company doesn't actually exist and neither does "Smith Dent". I called the scammer and told him that we'd exposed him and he wasn't too happy. He even said he'll be reporting me but couldn't tell me who to.

Scammer busted. If you feel like insulting him by SMS, his phone number is +44 703 185274. He's a scammer remember, he doesn't deserve respect or courtesy!
Posted by Richard Harriman at 14:18

These criminals attempted to scam me last week, but fortunately enough I did my checks and realised they were frauds.

I received email from this mn Smith and thinking that is true until I read this net that warned me.You help me much and hope can help many more by warning them too.Thanks and God bless you!!

My friend was almost scammed too by this person pretending to be a britishman named PATRICK ANDERSON... said he sent her a package with money...in few days my friend received a letter saying the package was on hold in MALAYSIA since it was detected to have currency inside... and she was asked to send money to MALAYSIAN AUTHORITY named MARIO DA COSTA... later did she know the certain MArio DA COSTA is an AFRICAN who probably resides in MALAYSIA... He uses a dummy FAKE delivery SErvice with a website though it is all part of the SCAM....

MARIO DA COSTA IS FAKE... beware of this person..she is with another scammer named KELLY BROWN... BEWARE OF THESE TWO PERSONS...THEY WILL DO ANYTHING JUST TO GET MONEY...EVEN TO THE POOR...THEY SHOULD BE IN JAIL!!

MARIO DA COSTA IS A FAKE!!! HE IS WITH ANOTHER SCAMMER NAMED KELLY BROWN...BEWARE OF THESE TWO HEARTLESS PERSONS...THEY MUST BE PUT IN JAIL!!

this person comunicated with me
by email (hotmail) and did a very similar process. he is telling this lie for a lot of latin american women and he is changing the photos to confuse the women or make them believe that man isn't which is in this page he offer marriage.he also use the name of western union (a company which is real) saying that they would send the parcel quicker paying 649 dolars but the women believe it because that company is real but the email is fake this happened to me 23/4/12