I have been invited by a friend to join a travel club called TVI Express. In turn I also have to invite two more members to join under my name. I believe this is a pyramid scheme like the ones you had described in your previous articles in The Voice newspaper.

Please can you advise about this one?

I think you’re right to be suspicious.

As with all Multi-Level Marketing schemes these days they have a very glossy looking web site that is full of pictures of happy smiling people, rainbows, private jets, sunshine and empty promises. Their main page includes an invitation to find out “how a few extra hours can build a Multi Million Dollar Business for you and your family”. Promises like that should ALWAYS a warning sign!

Elsewhere on their web site, in the Frequently Asked Questions page, is a very interesting item. It poses the question “Do I need to sell any products?”. The answer is worth quoting in full:


“No. You don’t need to sell any products. TVI Express is a unique e-commerce opportunity allowing you to build the Business around the globe sitting at your home. However, we do support leaders who take initiatives to promote the opportunity offline conducting seminars and workshops about the Opportunity.”

So all you do is join, pay them the joining fee of $250, then recruit two other people and money miraculously appears from nowhere? Scam! 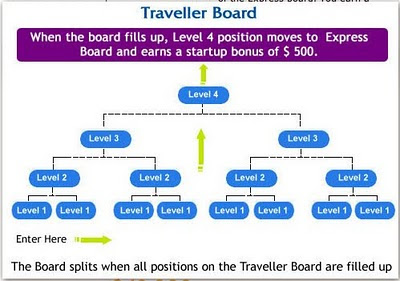 When you dig deeper into their web site their model becomes clearer. It’s a classic pyramid scheme. What you are meant to do is to recruit two other people, encourage them each to recruit another two and so on down the pyramid. Every recruit must pay the $250 entry fee and those amounts soon mount up to a significant sum. Once your network has recruited 3 levels beneath you (a total of 15 victims, 6 of which have recruited others) you get $250 cash and a $250 holiday voucher. But that’s after TVI have earned a total of $3,750. Your $250 isn’t much of a reward is it?

You’ll need your network to grow even more if you want to get to the next reward level. They claim that when your network has expanded to 7 levels beneath you (a total of 255 people, 127 of which have recruited others beneath them) they’ll give you a massive $10,000. But that’s after TVI has earned a massive $63,750. Again that’s not so impressive is it? But anyway, let’s get real. Do you really think that your team will be able to find 255 people foolish enough to fall for this hogwash?

Also as you supposedly progress through the levels of the pyramid TVI Express promise to give you all sorts of vouchers for holidays. They promise “incentives ranging from Luxury cars to Private Jets and Splendid Villas in exotic locations around the world” but that’s just another part of the scam. What use is a holiday voucher if you can’t afford to go on holiday?

Like all pyramid-structured schemes TVI is guaranteed to fail. Even the more “legitimate” schemes like Amway, who at least have products to sell, have been forced to concede that extremely few people make any money.

A couple of years ago, Amway were forced by the British courts to disclose “earnings” information about it’s distributors and this was startling. Despite the claims of millionaires, yachts and private planes it turns out that the average bonus paid to their agents was a measly £20. And get this. That £20 was income, not profit. That was before they paid their business expenses. If big MLM schems like Amway who really do ship products can only offer their distributors the equivalent of P200 before expenses how much do you really think TVI Express can offer?

As well as all the usual MLM warning signs about TVI Express there are some other clues that apply to all businesses, not just pyramids. I can’t find any mention of who founded TVI Express. Nowhere do they give the name of their founder, CEO, MD or General Manager. You’d think that they’d being showing off their success don’t you?

Also, they seem to be reluctant to give phone numbers. They give one in the UK but it’s apparently very hard to get through to them. Finally, they give a business address in the UK but it turns out they aren’t registered as a company in the UK. I know, I checked.

All in all, I think TVI is unbelievable and should NOT be trusted. It’s a pyramid scheme and I guarantee that if you give them your money you’ll just be throwing it away.

Last week we covered a complaint against Uniglobe New Era Travel a travel agents in Gaborone. A customer had paid them over P7,500 for a hotel stay in Kenya only to find that New Era failed to pay the hotel and when they gave him a refund the cheque bounced.

The good news is that Uniglobe who own the franchise that New Era operate has threatened to cancel the franchise if the customer isn’t refunded. The customer also went to visit New Era Travel with a friendly police officer who was very interested in the fraud they had committed. We’ll keep you informed!
Posted by Richard Harriman at 19:20