I contacted the crook, charlatan and idiot advertising himself on Facebook as the "Abortion Clinic".

You'll recall that he offers to deal with "un wanted pregnancies,womb cleaning in a private enviornment". His spelling, not mine. It didn't take too much detective work to establish that he's not a real doctor at all. He's a traditional quack.

Just to see what he was really offering I SMSed him and this was our correspondence. As you can see I lied about who I am. Sorry. 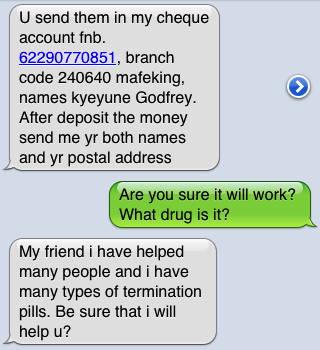 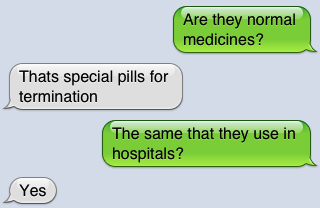 And then guess what? He called!

Realising that I probably don't sound much like a pregnant woman I grabbed Her Majesty and said, "You take this, talk to him!".

I didn't know I'm married to an actress. Using her special sad voice she spoke to him and asked him how he could help. She told him she was 6 months pregnant and desperate to terminate. He told her that she should feel free to take the medication he would send her. So what was he sending her?

So NOT a herbal concoction, he's sending the real thing. Well he says he is. Who knows what he really sends but let's assume he really does send Misoprostol.

Misoprostol is not something you fool around with. According to RxList Misoprostol (also known as Cytotec) is heavy-duty material and in a large warning says:

So our friend is peddling drugs, knowing that it's incredibly dangerous. But maybe he's just doing it with the best intentions? Not a chance. He's a crook and he knows it. I SMSed him asking if he was a doctor of medicine. This is his response. It speaks for itself. 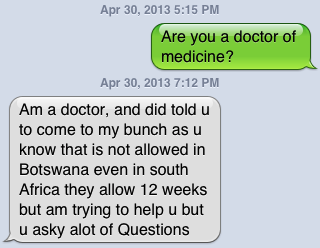 I was asked recently what I think about mob justice. I replied that I thought it was savage and unjust. But there are times when I can sympathise.
Posted by Richard Harriman at 19:34