Did he swindle me?

In September last year I went into an agreement with a Forex company in Commerce Park for the PAMM account offered by Hot Forex trading for a period of 6 months. Unfortunately in March 2019 they wrote me a letter purporting that the account has been hacked, which Hotforex trading desk denied. I have since lost over P36,000 of the P50,000 that I invested. I have followed him up on numerous occasions to pay me back but I have failed, even the P2,500 that was a security fee, he has refused to refund me.

Kindly assist because I suspect he has swindled a lot of us as there was a number of us who invested into the PAMM account and he has always refused to reveal the names of the other people. He has threatened that wherever I report, I will not be able to get my money back.

I think this is very suspicious. The Botswana-based forex company you met offer the services of the HotForex trading company which is based in St. Vincent & the Grenadines in the Caribbean. However, from the documents you sent me, it’s clear that you were dealing primarily with the local company. They were the ones who marketed the 60% profit they claimed you could make within six months. 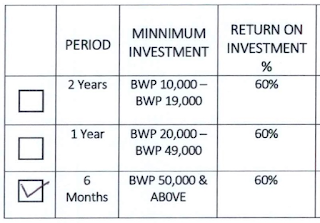 There are various approaches we can use to apply pressure on the local company. Firstly, they made the claim that you could make 60% return on your investment. That claim is illegal, contrary to Section 9 of the 2018 Consumer Protection Act which outlaws what it calls “multiplication schemes” where a company “offers, promises or guarantees to a participant an effective annual interest rate that is above the market rate”.

Also, it sounds to me that they were offering investment services. The agreement you signed certainly refers to you as the “investor” many times. I think that means they might be in deep trouble with NBFIRA who regulate financial and investment advisors.

Finally, there’s the claim that the company in the Caribbean was “hacked”. I can find no news reports of that happening and it’s a big enough story to have been widely reported. I suspect he’s making up stories.

Let’s both contact NBFIRA and I’ll also contact the local guy who seems to be telling stories. Let’s see if he can be more helpful?

Is World Ventures a pyramid scheme?

I am writing to you in order to hear facts concerning World Ventures Company and what is being said that about it that it is a Pyramid scheme. Can you please help me understand why it is said to be a pyramid scheme so as to have a concrete idea concerning it. 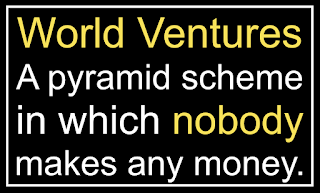 Like all other pyramid schemes, the truth is simple. The people at the top of the pyramid make money but only at the expense of the people they recruit them. Their latest income disclosure statement World Ventures published in the USA in 2016 showed firstly that 80% of the people who joined made nothing from World Ventures. NOTHING at all. Of the lucky ones who made any money, 77% of the money earned went to the top 5% of people. 74% of the people earning money shared just 10% of the income. And how much money did people actually make? If you include just those people who made money, the average earnings per year is a measly $355. If you include everyone in the scheme, it's a pitiful $30.

So please don't waste your time, money and effort joining pyramid schemes like this one. Remember that the new Consumer Protection Act makes promoting or even just joining a pyramid scheme illegal. Joining could result in a fine of up to P100,000 and five years in prison. Is it worth the risk?
Posted by Richard Harriman at 09:37