This email serves to lodge a complaint against a store in Francistown. I had made a laybye of a jacket which cost P1,380 sometimes between end of May or beginning of June 2019 and due to some unforeseen circumstances failed to pay the full amount. I visited the branch today and requested to cancel the laybye and had no problem with the 10% penalty / cancellation fee. I requested for a cash refund to enable me to use the funds elsewhere and even after the penalty, I was informed that they cannot give me a cash refund that they can only put the refunded amount in a gift voucher which I can only use to buy at the same store. They are forcing me to buy at their store even after the penalty which I agreed to pay which is 10% of the P345 I had paid as deposit.

Is there a way consumer watchdog can assist on the issue?

Like almost every agreement, this depends on what was in writing. Written agreements are everything. They’re the only things that matter. Verbal agreements are worthless.

I suggest you go back to any written agreement you had with the store and see what it says about payment terms. What does it say will happen if you default? Does it say that you’re not entitled to a cash refund? Does it say you must accept a voucher to spend in their store? Is that what it says? That’s the agreement you are committed to.

However, if there was no written agreement, I suspect you might be in a slightly more powerful position. My suggestion would be to deliver a letter or email to the store saying that you are cancelling the deal. Make your letter is the first thing that’s in writing. Tell them that the deal is cancelled and that in accordance with Section 15 (1) (e) of the Consumer Protection Regulations of 2001, you are formally cancelling the deal and that they must therefore restore to you any “deposit, down payment, or other payment” you have made to them. Remind them that the Regulations say that such a refund must be made “promptly”. It doesn’t define exactly what “promptly” means but I think we all know when something isn’t done promptly, don’t we?

Where are my forex profits?

There is a company in the CBD led by a certain lady who is a forex trader, I have been following her page in Facebook since 2017 before it disappeared this year. The company was doing great and it's services caught my eye. So beginning of this year around February she introduced account management and entrust account. I checked her at the CBD office with my husband and she gladly explained or described the two new services i.e their advantages and disadvantages. And we told her that we will think about them first. After 3 /4 months I went back to her CBD office to sign up for the entrust account. The account worked more like a loan to her in which we signed a contract on the 12th June 2019 and the contract was valid till the 12th August 2019 that's when she was supposed to return the money with the interest she agreed to pay. But she has since resorted to not paying me. She extended till the 30th August but still she couldn't pay and she promised to pay on the 6th September, but she has since blocked my number. Is there anyway u can help or advice me to solve this. 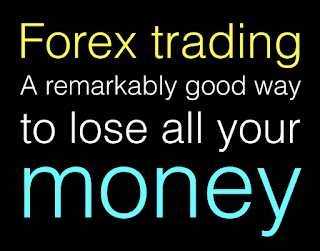 You need to remember that while forex trading is often described as a “zero-sum” game, where overall the amount of money stays the same, where for every winner there’s a loser, this isn’t actually true with forex trading. Ordinary mortals like you and me, if we’re reckless enough to trade forex, need to do so through a forex trading platform who take a cut from everything we trade. THEY are the only ones who consistently make money from the business. Whoever wins and loses, they make money. That’s why they’re so desperate to recruit new people.

In your case, I wonder whether any forex trading even took place? I think you should contact both the Bank of Botswana who regulate “deposit-taking” schemes and NBFIRA who oversee anyone who offers investment advice. Between them I think they have the power to make this person explain herself. Send me her details and I’ll get in touch with her as well.
Posted by Richard Harriman at 16:16