Actually I don’t mean “medical”, I mean “pseudo-medical”. Or perhaps “dangerous nonsense” is a better description. I mean the sort of nonsense that might end up getting someone killed.

Some people say that the “alternative” or “complimentary” health industry is harmless. Some even think that it does some good. Let’s deal with the last claim first. Does it do any good? Is there any evidence? Well, there IS lots of evidence and ALL of it shows that there is precisely NO benefit from what they have to offer. All the scientific evidence shows that reflexology, homeopathy, acupuncture, chiropractic and all the other examples of the alternative approach do nothing at all. Precisely nothing. 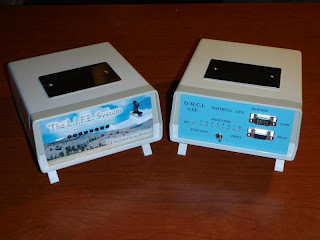 An example. There are several so-called alternative health practitioners in Botswana who peddle the use of a device they call the “QXCI”, or sometimes either the "EPFX" or “SCIO”. This is a box of fake electronics that they claim can do some remarkable things.

I found a South African web site that claims it:

Another web site explained that it was based on:

I found yet another web site that explained how this device works. See if you can understand any of this rubbish. They say that its “multi-layer faclity enables dysfunction unravelling”. It is also “Equivalent to radonic operation”. Best of all it explains that “Most computers are binary: 1 or 0. Quantum software is trinary - basis for artificial intelligence”.

In case you are wondering what the names QXCI, EPFX and SCIO mean, let me tell you. They are abbreviations for “Quantum Xrroid Consciousness Interface”, “Electro Physiological Feedback Xrroid” and “Scientific Consciousness Interface Operation”. Anyone with even the slightest scientific understanding will tell you that these are just collections of long words assembled by someone who has no knowledge of physics. Someone who doing their best to impress the gullible.

A couple of years ago I phoned one of the companies marketing these devices in South Africa to find out what it could do. They told me that it could cure “any disease”. They also told me that anyone can use it because when you buy the device you get a training package built in. All for the small sum of R200,000.

Let’s face facts. This is a device based on no scientific knowledge, understanding or evidence and about which a range of absurd claims are made. Don’t ever be tempted to get plugged in to one.

Here’s another reason why you should give these devices a miss. The US Food and Drug Administration have imposed a ban on importing the device into the USA because of the level of abuse they had seen from the charlatans peddling this silliness. In an interview with the Seattle Times a spokesman for the FDA said:


“This is pure, blatant fraud. The claims are baloney. These people prey in many cases on consumers who are desperate in seeking cures for very serious diseases.”

Amusingly the inventor of the machine, the self-proclaimed “Professor” Bill Nelson (he’s not really a professor of anything and instead performs as a transvestite singer under the name Desiré Dubounet) is in Hungary, a fugitive from US justice, on the run from fraud charges.

Do you really want to use a device that is based on fraud and baloney and was invented by a fugitive who calls himself Desiré and lies about his background?

Some people might say that this is all harmless. What’s the harm, they might ask? Given that these devices do precisely nothing what damage can they do?

Almost all alternative products have precisely no effect whatsoever so is there really any danger? Yes, of course there is. The danger is that someone with a real illness will go to one of these charlatans instead of going to a real doctor who can offer them a real treatment and a real chance of help. The danger is that someone with HIV, cancer, heart disease or any other medical disorder will go to one of these quacks with a SCIO machine instead of getting a treatment that will actually do them some good. If they’re lucky they’ll just not get any better. If they’re unlucky they’ll die.

Firstly, the placebo effect. Just the action of having some “treatment” can make you feel a bit better. Of course the placebo effect can’t grow back an amputated leg or cure cancer but it can make pain a little bit more bearable or the symptoms of a disorder FEEL a little bit better. Getting plugged in to a useless device might make you feel a little better, even though the machine itself is doing precisely nothing.

But these charlatans also rely on one other fact. Dead people don’t complain. Because they can’t. Their victims, the people who are either so desperate or ignorant that they think these fake treatments might work are the easiest to exploit for people selling false hope. They’re the people most likely to hand over large amounts of cash to get a miracle cure when they’re not thinking straight. Alternative medicine CAN be harmless but it can also be the worst form of abuse. Deadly abuse.
Posted by Richard Harriman at 17:58

People asking "what's the harm" regarding this "energy medicine" should check out http://whatstheharm.net/energymedicine.html

She trusted in the machine so much her leukemia went undiagnosed and she died, after paying a ton of money to buy one for her "doctor".